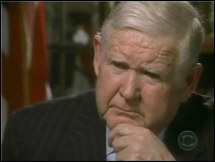 In an interview with 60 Minutes' Mike Wallace, Rep. John Murtha says that Iraqis are already in the middle of a civil war. He says that the political reality of U.S. elections will be one of the reasons that most troops will be redeployed from Iraq by the end of this year.

Crook and Liars has other video formats.

« PREVIOUS STORY "BREAKING: Ney To 'Temporarily' Step Down"
» Go to The BRAD BLOG front page «
"VIDEO - 'I Have A Dream' by Martin Luther King Jr." NEXT STORY »

The enormity of the incompetence of the Bush "administration" is overwhelming.

Mike Wallace was somewhat (and surprisingly, I think) of a Prick to Murtha. Maybe he's been taking notes from (P)Ricky.

Soldiers trying to get out of Army … http://seattlepi.nwsourc.../1110AP_Getting_Out.html … Increasing numbers of men and women in uniform are seeking honorable discharges as conscientious objectors. Others are suing the military, claiming their obligation has been wrongfully extended. Many have simply deserted, refusing to appear for duty.