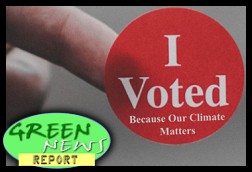 IN TODAY'S RADIO REPORT: Missing 'red wave' in 2022 midterm elections is good news for the climate; New reports warn of skyrocketing methane levels; PLUS: Mixed results for state environmental ballot propositions... All that and more in today's Green News Report!

IN 'GREEN NEWS EXTRA' (see links below): Former Interior Secretary Zinke wins Montana US House seat; A NASA satellite launched to detect dust has discovered huge methane leaks; COP27: John Kerry makes his move on private climate finance; Heat pumps mandated in Washington state; No Surprise: Climate Denier John Stossel Spreads Disinformation about EVs; US To Climate Summit: American climate policy won't be repealed; How Mitsubishi vacuumed up tuna from a rogue Chinese fishing fleet; Who's driving climate change? New data catalogs 72,000 polluters and counting... PLUS: How to Live in a Catastrophe: In search of a way to think clearly about the planetary crisis... and much, MUCH more! ...

Today on The BradCast: Our U.S. corporate media are still cowed by the radical Right and still failing in their Constitutional mandate to inform and educate the electorate; a few quick items from the UNconventional Times files in advance of the 2022 midterms; and a much-needed new tune to leave you whistling on the way out. [Audio link to full show is posted below this summary.]

First up, as I've long argued on this program, it's a mistake to buy into the political punditry of Conventional Wisdom that Dems will taking a beating this November. While the climb is still an uphill one for them this year --- particularly in the House --- polling is now bearing out my warning from months ago to ignore Conventional Wisdom in these decidedly UNconventional times. Some brief new exhibits for that case today: Maryland's popular, termed-out Republican Gov. Larry Hogan is describing Dan Cox, the state's Trump-endorsed GOP nominee for Hogan's job, as "not mentally stable", and "a nut" who has "no chance whatsoever" of winning the Governorship.

Further harming GOP odds this year, Trump's ever-worsening legal woes. As CNN reported last night, there are now 18 former top Trump Administration officials --- from two Chiefs of Staff to key military and intel officials --- who tell the news net that the disgraced former President's claim to have had a "standing order" that any documents he left the Oval Office with were immediately declassified is "ludicrous," "ridiculous," "a complete fiction" and worse.

CNN's exclusive reporting, however, never makes clear to readers that, whether or not the highly sensitive national security documents were declassified or not, doesn't actually matter. It was still unlawful for Trump to have stolen them when leaving the White House. That is a fact no matter the classification status of those documents or any other material that he stole upon leaving office last year.

Why are they so afraid to use a 100% accurate description like "stole" when describing what Trump stole from the White House? Or, as we've discussed on many previous shows, simply using plain language to describe Trump's many failed attempts to steal the 2020 Presidential election? (He wasn't trying to "undermine" or "reverse" or "overturn" the results, he was trying to STEAL the election!) Our guest today has some thoughts on all of that and more. He joins us the day after news broke that new management at CNN is cancelling Reliable Sources, the only legitimate media criticism program on cable or broadcast TV news, as hosted by Brian Stelter for 9 years at the end of its 30-year run.

We're delighted to welcome today longtime media critic and former corporate media "insider", DAN FROOMKIN, who served 12 years heading up Washington Post's popular "White House Watch" blog during the George W. Bush era (before he was unceremoniously let go for being too good at it), after which he moved to Huff Post and then The Intercept and is now the editor and creator of the Press Watch newsletter and website.

Our conversation follows on CNN's axing of Reliable Sources, as well as recent headlines from major media outlets that horrifically mislead the public or pull punches in order to "both sides" facts that they clearly see as as politically controversial, no matter how true they happen to be. One example, as cited by NYU media critic Jay Rosen last week, Washington Post's "Garland vowed to depoliticize Justice. Then the FBI searched Mar-a-Lago." And another deconstructed this week by media critic James Fallows on the New York Times' "Even on Biden's Big Day, He's Still in Trump's Long Shadow."

We cover a lot of ground on all of the above and more with Froomkin today. But, a few key quotes...

On Stelter and CNN: "It's a terrible indicator about what CNN is doing and where it's going. ....It's a huge loss for CNN and a huge win for Fox because Stelter was really one of the few in mainstream media who was willing to say that Fox News was all about spreading malicious lies and poisoning the politics of our country. ... I think the reason he was canned was because he was basically the number one target of the rightwing media." Froomkin describes the move as "clearly a sacrifice on the altar of rightwing media," likely at the behest of a major stockholder ("John Malone, the cable company monopolist") of CNN's new owner following the recent merger and reorganization of Warner Bros. and Discovery.

On the lack of Public Editors/Ombudsmen at major corporate outlets like NYT and WaPo: "Public Editors were an incredibly valuable thing...then they were all ditched. The excuse was hysterically funny. The excuse from the New York Times publisher was, 'We don't need a public editor anymore, because we have social media.' That has a certain sense to it, except you look at what they've been doing the last ten years. They've been scrupulously ignoring social media, mocking social media criticism of themselves. They've been incredibly defensive about anything anyone tweets about them. And they've now passed all of these rules telling reporters what they're allowed to tweet and not allowed to tweet, and one of the things they're not allowed to tweet is any criticism of the Times or any other journalists. Same rules at the Washington Post. ... I've always hoped that there would be a sort of critical mass of media critics out there who would cumulatively have the heft of one of these Public Editors, but it's never happened. And, as you pointed out, we're becoming fewer and further between."

On other ongoing corporate media failures in the Age of Trump: "The worst example, by far, is the coverage of the January 6 Committee and what's happened since. The singular achievement of that Committee was that it had established, to the satisfaction of pretty much everybody, except for the willfully ignorant, that prosecuting Trump was not a political necessity --- it was a moral necessity. I think that really helped inoculate [Attorney General Merrick] Garland against the perception that what he would be doing would be political. Instead, the FBI does a search warrant on Mar-a-Lago because of documents that [Trump] stole and didn't give back and then lied about giving back, and the press sees this as some sort of a political fight?!"

As to why the bulk of the mainstream media won't use the word "stole" or "steal" as in the indisputable facts regarding the documents Trump stole from the White House or his many attempts to steal the 2020 election: "Unfortunately, the truth has become so politicized in this day and age that simply asserting the truth is seen as political by these people. And they don't want to do that. ... Five years ago, I think everybody in the country would have agreed that trying to steal the Presidential election was a bad thing and whoever did it ought to be held accountable. But it's a little bit like the frog in the pot --- the media has, day after day, normalized what Trump does."

Much more in my fascinating conversation with Froomkin today.

Finally, as promised, we leave you with a long-overdue and much-needed new Randy Rainbow ditty to end yet another impossible week. Enjoy!...

Sending our love and best wishes to get better soon today to our regular BradCast guest host, Nicole Sandler, who cracked a couple of ribs over the weekend, so wasn't able to fill in for us on yesterday's show as previously planned. But, we're back today with --- you'll be shocked to learn --- lots of news to cover! [Audio link to full show is posted below this summary.]

Among today's many stories of note... 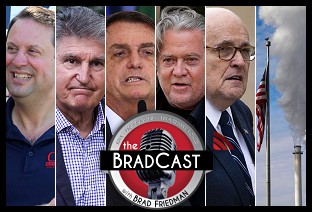 There were almost too many clear and present dangers to fit into today's BradCast. But we did our best. Buckle up. [Audio link to full show follows below this summary.]