KEY BRAD BLOG ARTICLES IN THE SERIES SO FAR
(Most recent articles at bottom of list.)

2/5/08: Problems (and Confusion) at L.A. County Polls Today
Independent Voters Have Trouble Voting, and Having Their Vote Counted, in the Open Democratic Primary
A Legal Battle Could Be on the Horizon Over 'California's Butterfly Ballot' if Results are Close...

2/6/08: Other Than That, Mrs. Lincoln, How Was the Play? - LA Times Reports 'Few Election Glitches, Except for Independents'
ALSO: Video Indicates Los Angeles Registration Problems for Republicans as well...

2/14/08: How to Count L.A. County's 'Double Bubble' Fiasco Ballots Accurately and Immediately
As the Clock Ticks Towards Final Certification, and the County's Registrar Makes Excuses, Hundreds of Thousands of Voters Stand to be Disenfranchised for No Reason at All...
Every Vote Counted REDUCES the Current Error Rate! The Registrar Must Act NOW!

2/16/08: L.A. County 'Double Bubble' Disenfranchisement Happened Before, Registrar Conny McCormack Did Nothing About It
44% of Non-Partisan Cross-Over Ballots Went Uncounted in March '04, 42% Uncounted in June '06, Before Same Ballot Design Used Again for the February 2008 Super Tuesday Primary
As LA Times Gets Religion on Election Integrity Issues, But Doesn't Bother Apologizing For Their Failures to do so up to Now...

2/18/08: Former L.A. County Registrar Blames Everyone But Herself for 'Double Bubble' Failure Which Went 'Unheeded' for Six Years
'No One Could Have Predicted This,' Conny McCormack Tells LA Times in Her Best Condoleese, About Her Ballot Design That Disenfranchsed 40% of Voters in At Least Two Previous Elections...

2/26/08: L.A. County Registrar Prepares to NOT Count Thousands of 'Double Bubble' Ballots from Super Tuesday's Democratic Primary
New Planned Method for Counting Uncounted Non-Partisan Crossover Ballots, as Proposed by Dean Logan in Response to Sec. of State's Request, Will Needlessly Disenfranchise Thousands of Legal Voters
SoS Bowen Must Intervene Again to Assure All Votes That Can be Counted ARE Counted...

3/04/08: L.A. County Registrar Chooses to Disenfranchise 12,000 Voters in Final 'Double Bubble' Ballot Tally
But the Good News: Provisional Ballots, Newly Discovered as Uncounted, as Reported by The BRAD BLOG on Friday, Were Ultimately Counted...by Hand!
Joint Legislative Hearing on 'Double Bubble' and Other Super Tuesday Problems to be Held on Friday in Los Angeles... 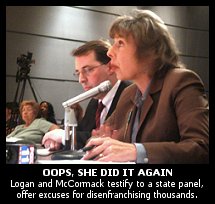 3/10/08: VIDEO: Brad Friedman and Other Election Integrity Advocates Speak At Historic California Hearing On Voting Problems
The BRAD BLOG Publisher Also Nearly Gets Thrown Out Of Hearing by The Sergeant-at-Arms