There was a little something for everyone, it seems, in Tuesday's primary elections in Vermont, Connecticut, Minnesota and Wisconsin. We cover as much of it as we can on today's BradCast, as voters in all but 10 states have now selected their candidates for the crucial 2018 midterms. [Audio link to show follows below.]

There were a lot of "firsts" and reasons for Democrats to be optimistic about November, based on the reported results today, and some of that optimism comes from races that Donald Trump believes he is happy about today, as his party moves farther and farther to the right to become the Party of Trump. It should also be noted that many of the Democratic winners on Tuesday were both progressive and political newcomers.

Among the many noteworthy contests on Tuesday covered on today's show, we now have the first transgender person to become a major party nominee for Governor (Christine Hallquist in VT); the first African-American woman to likely represent New England in the U.S. House (former teen mother turned "Teacher of the Year", Jahana Hayes in CT); the first Somali-American refugee who will likely become one of two of the first Muslim women to be elected to Congress (Ilhan Omar in MN); a stunning upset in Minnesota's Republican gubernatorial primary (front-runner and former two-term Gov. Tim Pawlenty was crushed by Trump-endorsed Jeff Johnson); and there were some encouraging Democratic wins in Wisconsin and victories over moderate GOPers by fully Trumped-up Republicans in several races.

We're joined today by native Wisconsinite and longtime progressive journalist JOHN NICHOLS of The Nation and of Madison, WI's Capitol Times for analysis and insight on all of the above, as WI's controversial, union-busting, two-term Republican Gov. Scott Walker faces his greatest political challenge this November against Tuesday's Democratic nominee, state school superintendent Tony Evers, and as the Democrats' face a tough fight to flip retiring House Speaker Paul Ryan's seat from "red" to "blue" with the Bernie Sanders-endorsed iron-worker and union organizer turned first time politician, Randy Bryce.

We cover a LOT of ground on today's show (including the late domestic abuse allegations against MN Rep. Keith Ellison, who easily won his Democratic primary in the state's Attorney General's race), so it's best I just let you listen rather than try to summarize Nichols' keen insights on Tuesday's races and more.

Also today: Democrats celebrate Governor Jeff Colyer's surprising sudden concession last night to Kansas Sec. of State Kris Kobach in the razor-thin battle for the GOP Gubernatorial nomination following last week's primary in the state; And the anti-gay Colorado baker/bigot who refused to bake a cake for a gay couple's wedding, under the pretext of "religious liberty", is now back in court after refusing to sell a cake to a transgender customer... 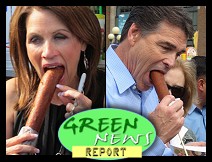 IN TODAY'S RADIO REPORT: Obama plays the infrastructure card; Perry jumps in; Huntsman refers to EPA as 'terrorists', while all of the GOP candidates positions on science and global warming are difficult to swallow; the Summer of Records continues; PLUS: Arctic ice melting 4 times faster than predicted ... All that and more in today's Green News Report! 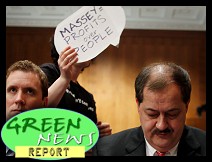 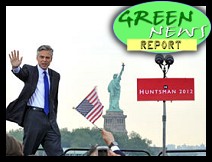 IN TODAY'S RADIO REPORT: Another Republican global warming non-denier enters the 2012 race; US solar industry now employs more people than the US steel industry; Bad news for the world's oceans, good news for those who like to lie about them; PLUS: Inspiration and dedication from the antidote to cynicism, Van Jones ... All that and more in today's Green News Report! 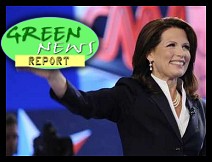