Even if it withstands Los Angeles County's appeal to the 9th Circuit, the well intended decision, handed down last month by veteran U.S. District Court Judge David O. Carter in a federal lawsuit filed by the LA Alliance for Human Rights, will, at best, ameliorate but not eliminate the nightmare of homelessness at the heart of a place that dares to call itself the City of Angels.

In support of legal grounds for federal court intervention, such as the Equal Protection Clause of the 14th Amendment, Judge Carter laid out, in compelling detail, the link between LA's deadly "crisis of homelessness" and "entrenched structural racism". The validity of that link was underscored by the fact that African-Americans account for only 8% of the general population in the County; yet they account for 42% of the now more than 66,000 unhoused residents.

Judge Carter's lengthy, 110-page decision contains a deep dive into a sordid history of systemic racism in Southern California and its disparate impact on people of color. This, in the Court's view, has given rise to what California Governor Gavin Newson, in his Feb. 19, 2020 State of the State Address, referred to as "the wrenching reality of families, children and seniors living unfed on a concrete bed." The Court condemned the City and County's deliberate decisions to perpetuate unspeakable squalor by attempting to physically contain it within a 50-square-block downtown Skid Row and by policing policies that criminalize homelessness.

The Court described the mishandling of funds intended to provide shelter as the product of "corruption" and "deliberate indifference" towards the unhoused, who suffer from rampant crime, drug addiction, mental illness and deaths caused by all manner of disease. In 2016, for example, LA voters passed a $1.2 billion bond measure that was supposed to create up to 10,000 homes. Over the ensuing four-years, the City erected only 489 housing units (apartments) at a median cost of $531,000 per unit --- units that have been disproportionately occupied by the unhoused who are white.

To rectify this, the Court, by way of a preliminary injunction, ordered an audit of all relief funds and the placement of $1 billion from Mayor Eric Garcetti's "Justice Budget" into an Escrow Account. Judge Carter appointed a Special Master to assist with the implementation of the Court's directives. Despite protestations that they lacked the necessary funds and an objective reality that one can't expect to extract blood from a stone, the Court also ordered the City and County to provide shelter to all unhoused residents within 180 days. (The preliminary injunction will not take effect prior to June 15 by reason of a temporary 9th Circuit administrative stay).

As we observed in 2019, the source of LA's homeless crisis lies not only in a legacy of systemic racism, but also in extreme inequality, which is tied to neoliberal capitalism. This entails a radical form of market fundamentalism, which has been at the center of U.S. economic policies since the Reagan administration.

LA's homelessness crisis will not end absent the federal government's adoption of what former U.S. Labor Secretary Robert Reich has described as "Bidenomics"...

We've got a lot of news and notes of concern --- both good and bad --- about the 2020 elections on today's BradCast. [Audio link posted below.]

Among the many stories covered today...

IN TODAY'S RADIO REPORT: Mozambique, already facing a humanitarian crisis, braces it's second monster cyclone in one month; Loss of Arctic permafrost could cost the global economy trillions; More than a thousand arrested as massive climate protests end in London; PLUS: Los Angeles moves ahead with its own Green New Deal to combat climate change... All that and more in today's Green News Report!

IN 'GREEN NEWS EXTRA' (see links below): At what point should you start freaking out about climate change? Right now; Fox News has united the right against the Green New Deal. The left remains divided; After years of progress, the number of Americans breathing polluted air is rising; The UK has seen a record number of fires this year, and it's only April; Farmers could be crushed by climate change --- or not; Thousands of penguin chicks wiped out; Stop denying the risks of air pollution; As floods increase, cities like Detroit are looking to green stormwater infrastructure; Facebook fact-checker has ties to climate doubt... PLUS: Nearly half of young Americans say climate change is a "crisis" requiring "urgent action"... and much, MUCH more! ...

IN 'GREEN NEWS EXTRA' (see links below): The Green New Deal: a centuries-old idea could revolutionize climate policy; >'Moment of reckoning': US cities burn recyclables after China bans imports; How EPA Wehrum’s former law firm profited from the fight to roll back air rules; Polar Vortex showed how much renewable energy storage may be needed; Is the 'insect apocalypse' really upon us?; MI Gov. Whitmer's new environmental order leaves 'polluter panels' in place— for now; Supreme Court Clean Water Act case could have big impact on coal ash disposal... PLUS: Video: 'We are entering into an unprecedented climate', say authors David Wallace-Wells and Dr. Michael Mann... and much, MUCH more! ...

IN 'GREEN NEWS EXTRA' (see links below): If Not the Green New Deal, Then What?: We asked two GND critics to share their good-faith alternatives for reversing climate change; EPA Scientists: The Toxic Chemicals Our Agency Won’t Regulate Are Definitely in Our Drinking Water; TVA board rebukes Trump, votes to close two coal-fired power plants; School climate strike children’s garners academics' support; Landmark Australian ruling rejects coal mine over global warming; Weedkiller 'raises risk of non-Hodgkin lymphoma by 41 percent; With Democrats in Charge, House Science Committee Talks About Climate Science... PLUS: PGE, NextEra team up for largest wind-solar-storage project in US... and much, MUCH more! ... 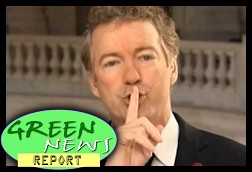 IN 'GREEN NEWS EXTRA' (see links below): The Arctic has melted so much that now people want to race yachts through it; Tea Party hires actors to feign indignation over plan to save Everglades; Plummeting sardine numbers could prompt U.S. West coast fishing ban; New York just quietly raided its climate program for cash; Michael Bloomberg puts up $30m to kill coal; Utility sales may drop by half as homes make their own power... PLUS: VIDEO: Is "Game of Thrones" Cli-Fi... and much, MUCH more! ...