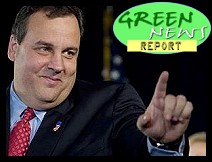 IN TODAY'S RADIO REPORT: In our exclusive leaked audio, climate denial kingpin billionaire David Koch calls NJ's Chris Christie "my kind of guy" and reveals they met privately before the Governor pulled out of a major greenhouse gas initiative; Wednesday's GOP debate goes from science to fiction; Gov. Perry's TX is now the hottest state ever on record! PLUS: The planet is still not listening to Republicans ... All that and more in today's Green News Report!

More on Solyndra – The next move
www.zerohedge.com/contri...ndra-%E2%80%93-next-move

Here's a great analysis of the global market forces at work in the solar industry, with a chart showing the astronomical subsidies the Chinese have given their solar industry, in comparison to the anemic US:

Are the Chinese Using Predatory Pricing to Knock America Out of Solar Manufacturing?
http://thinkprogress.org...predatory-pricing-solar/

Of course, the oil industry receives $4 BILLION in permanent subsidies and tax breaks from U.S. taxpayers EVERY YEAR, and has been receiving taxpayer subsidies since 1916. (that does not include the cost of U.S. military defense and support of the oil industry around the world)

The entire U.S. nuclear industry exists only because of taxpayer loan guarantees, because Wall Street refuses to take the financial risk. And that's even after Congress made sure to exempt the U.S. nuclear industry from all liability in the event of a nuclear accident, meaning that the U.S. taxpayer foots the entire bill when something goes wrong.

If the CEO of Solyndra mislead the Dept. of Energy, [on edit, it should go without saying that if there was any criminal wrongdoing] then that should be prosecuted, but it doesn't follow logically that any alleged misdeeds are an indictment of the solar industry or the entire clean energy industry.

Unless, of course, you're not interested in the facts or in reality and are only interested in pushing the interests of the fossil fuel industry and the climate change denial industry.