As recounted in a front-page article in The New York Times, on the strength of a single "yes" from a member of the Party of No, President Barack Obama described the 14 to 9 Senate Finance Committee vote in favor of the Baucus health care bill as "a critical milestone," adding, "We are now closer than ever to passing health care reform."

With all due respect, Mr. President, it is nothing of the sort. To the contrary, the Senate Finance Committee has produced nothing less than a legislative obscenity.

After nearly a year of back room deals and unending propaganda, which has included extensive corporate media coverage of insurance industry sponsored, wing-nut assaults on town halls, fabricated issues about "death panels," the exclusion of single-payer advocates from the White House and the Senate Finance Committee, and a deafening corporate media silence about the widespread public support* for a single-payer (Medicare for All) system, the time has come to pierce through the confusion by asking and answering a few simple questions...

On Friday the House Labor and Education Committee voted 27 - 19 to adopt an amendment offered by Rep. Dennis Kucinich (D-OH) to HR 3200 [PDF], the hybrid "public option" health care legislation that leaves in place the current multi-payer system. The Kucinich amendment was supported by 13 of the Committee's Republicans. It was opposed by the Committee's chairman, George Miller (D-CA). If it survives a House floor vote and a House/Senate Conference Committee, the Kucinich amendment would insure that efforts to secure single-payer systems at the state level would not be preempted by federal law.

As explained by Donna Smith, co-chair of Progressive Democrats of America's "Healthcare NOT Warfare" campaign during a July 15, 2009 conference call [audio] amongst single-payer activists, the Kucinich amendment does not reflect an abandonment of the effort to enact the national single-payer system embodied in HR 676 [PDF]. As Smith sees it, the right to basic health care is a civil right, and like the earlier civil rights movement, its advocates must be flexible, yet relentless in pressing various strategies to put an end to what I described in "Single-Payer and the 'Democracy Deficit'" as a corrupt, dysfunctional and deadly system which places the obscene wealth of the few over the health and very lives of our citizens.

The Kucinich amendment would permit single-payer advocates in the U.S. to pursue the same strategy used in Canada where a single-payer system was first adopted at the province level, eventually placing pressure on Canada's federal government to adopt a national health care system.

This, by no means, suggests that HR 3200 comes even close to representing meaningful reform... 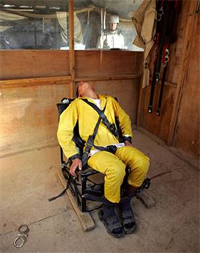 Until last night, the criminal responsibility for the torturing of terror suspects by the U.S. government was entirely on the heads of George Bush, Dick Cheney, their senior aides and the civilian and uniformed military leadership who approved and implemented "advanced interrogation techniques" such as waterboarding.

Late in the evening yesterday, however, the U.S. Senate, including all Republicans who were present, Sen. Joe Lieberman (I-CN) and six senior Democrats, willingly assumed responsibly for Bush's torture policies by rubberstamping his nominee, Michael Mukasey, to be the next U.S. attorney general.

Mukasey --- a crony of Rudy Giuliani, the Republican presidential candidate who, during his tenure as New York City mayor, revealed fascistic tendencies that are alarmingly similar to those of George Bush and Dick Cheney --- indicated during his confirmation hearing before the Senate Judiciary Committee that he will continue to greenlight Bush's torture policies.

Now the question is, will Mukasey also assist Bush, Cheney and the rest in trying to avoid war-crimes charges after they leave office.

The six senior Democratic senators who voted to confirm Mukasey and thus condone torture were:

Blogged by Brad from the road...

New Hampshire Election Integrity advocates bird-dogged the prospective Presidential Candidate and co-author of the disastrous Help America Vote Act (HAVA) of 2002, Sen. Christopher Dodd (D-CT), a couple of weeks ago concerning the failures of that bill. The short video follows.

We hope other folks will do same with Presidential Candidates from any and all parties and share their video tapes of responses. One of the things we learned in Arizona from Ted Downing, the chair of the Election Integrity Committee of the state's Democratic Party (the only state party in the union to have such a committee!), is that he plans to ask each and every Presidential Candidate to appoint an Election Integrity "Cabinet Member" to their campaign staff. We'll try to report back if and when any of those candidates take him up on that.

(Links to my radio interview with Downing and others in Arizona while Guest Hosting Mike Malloy and Peter B. Collin's shows are right here.)

We'll just add one comment in reply to the below video for the moment: Mr. Dodd, the system has not been "improved since 2000." It is far far worse.