Please. NBC. Please put David Gregory and Meet the Press out of our misery. Pretty please? Would it help if I released a wholly unverified video claiming that Hamas was firing rockets towards Israel out of 30 Rock?

Last Thursday, as we noted at the time, Israel had reportedly bombed a U.N. shelter at a U.N. school compound, "designated as a haven for the displaced", according to AP. The attack on the shelter in northern Gaza was said to have killed at least 15 and injured scores more, many of them children. Israel had claimed, at the time, that they had sent a warning the night before so, presumably, it's all cool and totally the Red Cross' or Hamas' or the children's own fault for having been killed or injured in Israel's mortar attack. Had they only re-located to a safer place --- like, say, a U.N. shelter?! --- none of it would have happened.

Israel claimed at the time that the school compound in question had been used by Hamas as a base for firing rockets at Israel.

On Sunday, Israel released a grainy video purporting to show rockets being fired from the compound. Minutes after they had posted it to YouTube --- and just after his interview with Israeli Prime Minister Benjamin Netanyahu --- David Gregory of NBC's Meet the Press confronted U.N. Relief & Works Agency spokesperson Chris Gunness about the video --- which the U.N. spokesman could not see from his satellite location in Tel Aviv.

"The Israeli government has released videotape within the past hour, it was posted on YouTube, NBC News hasn't independently verified," Gregory explained to Gunness. "The Israelis say --- and I realize that you cannot see this video, our audience can, and I'm going to describe it to you --- that purports to show rockets being fired from a UN school."

"Is this accurate?" Gregory asked. "Could this be happening without the UN's knowledge, that would only bolster the Prime Minister's point that, in fact, Hamas is using civilians, using the United Nations even in a kind of propaganda war?"...

Now that the East Coast and parts of the southern U.S. have been battered over and again with extreme weather this winter, and while California is in the midst of its worst and longest drought on historical record, the Sunday "news" shows, all at once, decided to cover what they describe as "climate change" --- or, in the words of NBC's Meet the Press host, David Gregory, "The Politics of Weather".

Pierce called the embarrassing exchange "every bit as grim as you can imagine", and it certainly was. Here's just part of his scathing, dead-on-the-money response to it...

I hope the media excitement over this White Bronco moment sustains and re-focuses on what the US government is doing in the dark.

That said, given this "Catch Me If You Can" international chase, this may be one (very brief) moment, in which I can (for now) forgive the mainstream corporate media for their breathless worldwide, man-of-mystery manhunt coverage. Snowden's Run is, after all, just one helluva good thriller story.

The New York Times' David Carr described it this way: "[A]s Edward J. Snowden made his way across the globe with a disintegrating passport and newly emerged allies, Twitter was there, serving up a new kind of chase coverage, with breathless updates from hovering digital observers speculating about the fleeing leaker’s next move. All day Sunday, it was like watching a spy movie unfold in pixels, except it was all very real and no one knows how it ends."

What is impossible to forgive, however, is another sideline distraction to the substance of Edward Snowden's disclosures that happened on Sunday, though it's a disturbingly important one that needs more light amidst the other, thrilling, if less important distractions. This part of the story came via the national embarrassment otherwise known as NBC's Meet the Press with David Gregory, when the titular host suggested that Guardian journalist Glenn Greenwald, who helped break many of the Snowden disclosures, had "aided and abetted" the former NSA contractor, and should, therefore, be "charged with a crime" himself.

Gregory's friendly help to the U.S. Government's surging War on Journalism was echoed again today, by yet another supposed journalist, when Andrew Ross Sorkin, a financial columnist for the national embarrassment otherwise known as the New York Times, offered (also on live television) that he would "almost arrest" Greenwald in addition to Snowden...

Props to CNN's Soledad O'Brien for her dogged attempt to get an actual answer from Romney's Senior Advisor (and former Commerce Secretary) Carlos Gutierrez as to whether the presumptive GOP nominee supports Arizona's controversial "papers please" law, in light of yesterday's SCOTUS ruling striking down most of the law, but allowing the most controversial part of it to stand (for now.)

If the rest of the media insisted on actual answers from politicians and their surrogates before moving on (talking to you David Gregory), we might actually move the ball forward occasionally.

For the record, Romney has previously called AZ's SB1070, the law that was largely struck down yesterday, a "model" for the nation. But I guess we all get to pretend he didn't for a while, as he tries to Etch-a-Sketch his way out of the extremist positions he staked out in hopes of winning the GOP primaries.

Perhaps we should call it the David Gregory Technique, since the dreadful Meet the Press host seems to use it, and little more, week in and week out during his usually useless interviews with public officials.

Here's how the David Gregory Technique works: Ask a public official for "your response to that charge?" Get that response. And then move on to the next question. No follow-up. No challenge. It's that simple. Just get their "response" on record --- like an in-person performance of the public official's already-published press release responding, either accurately or not, to the same issue.

Afterword, news consumers are no more informed or enlightened than before going in, other than to become familiar with the political talking points in play, whether they are based in fact or reality or not. Who knows?

Such was the treatment that Florida Gov. Rick Scott (R) enjoyed last week from Michele Martin on the apparently ironically named TELL ME MORE program on National Public Radio concerning his spate of allegedly unlawful, attempted voter suppression programs in the Sunshine State. NBC's David Gregory couldn't have done it better himself... 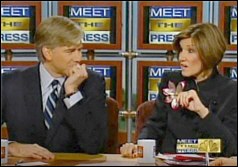 Gregory: Mary, ...the Vice President of the United States accidentally shot a man... and the Vice President's office doesn't feel an obligation to disclose that to the American people directly? You do it through a ranch owner in Texas? It just strikes me as odd.

Matalin: It strikes you as odd because you live in a parallel universe...

Gregory: ...If the Vice President did everything right by disclosing it the way he did, why did you do a big national interview this week?

Gregory: That's an unfortunate use of that word, by the way.

Matalin: Oh OK... Were you saving up for that line?

So, Matalin slips in the inflammatory "jihad" remark and then accuses Gregory of "saving up for that line"?