"We're hearing that Solicitor General (the No. 4 slot at the Justice Department) Don Verrilli --- formerly deputy White House counsel --- may be atop the list," they report. "He's smart --- many say 'brilliant' --- well-liked by Obama and was confirmed by the Senate three years ago on a 72-16 vote. And one of those 'aye' votes, as our colleague Ruth Marcus pointed out, was from Majority-Leader-in-waiting Sen. Mitch McConnell. (R-Ky.)"

That's all well and good, and might help make Verrilli more confirmable in the U.S. Senate than other, better choices. Naturally, someone that Republicans can approve of should be one of the highest priorities in selecting Barack Obama's next Attorney General. (Sigh...)

But, that said, this might be a good time to point you back to our piece from early 2013, written by our legal analyst Ernie Canning, headined, "Donald Verrilli: Obama's Incompetent Solicitor General, Muddled Middle or Both?"

In the piece, Canning offers a fairly devastating analysis of Verrilli's dismal performance before the U.S. Supreme Court in two landmark marriage equality cases last year. As he wrote at the time, if the side that Verrilli was on in those cases eventually prevailed (they did, in both cases) it would "be despite the half-baked arguments presented by the Solicitor General, not because of them."

We'll also note that Verrilli's performance in the Voting Rights Act case was similarly nothing short of dismal. The other attorneys who also argued on the same side in the case (most notably, the NAACP's Debo Adegbile, whose later nomination to head the Civil Rights division of DoJ was shamefully torpedoed by Republicans and several Democrats) argued their case smartly and persuasively. Verrilli, by stark contrast, was horrible during oral argument, just as we found him to be in the marriage equality cases. The voting rights case was ultimately lost and SCOTUS infamously gutted the Voting Rights Act in the bargain.

Perhaps Verrilli is a better attorney and/or administrator than his skills as a litigator in oral argument before the Supreme Court revealed. But, if not, based on those cases last year, at least, it seems he'd be a disastrous choice as the next AG. Just thought we should mention that.

( 6 so far... )
Article Categories: Rights And Freedoms, Barack Obama, Marriage Equality, U.S. Supreme Court, Eric Holder, Voting Rights Act, Donald B Verrilli
Donald Verrilli: Obama's Incompetent Solicitor General, Muddled Middle or Both?
Like 'ObamaCare', marriage equality may prevail at SCOTUS despite, rather than because of, Obama Administration's arguments...
By Ernest A. Canning on 3/30/2013 8:35am PT 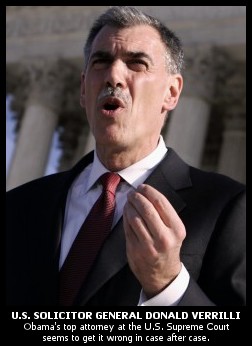 On paper, Donald B. Verrilli, Jr., who was appointed by President Barack Obama to replace now Supreme Court Justice Elana Kagan as the U.S. Solicitor General, appears to be an experienced litigator with a distinguished background.

It is a background that includes having served as a law clerk for former U.S. Supreme Court Justice William Brennan, Jr. and having participated in over 100 cases before the U.S. Supreme Court. However, Verrilli's participation in Supreme Court oral arguments --- earlier with respect to the Affordable Care Act (ACA, or "ObamaCare") and, recently, in the challenge to Section 5 of the Voting Rights Act, as well as U.S. v. Windsor, with respect to the Defense of Marriage Act (DOMA) and in Hollingsworth v. Perry pertaining to California's Proposition 8 --- raises some disturbing questions.

Either Verrilli lacks the professional competence to assume primary responsibility for supervising and conducting litigation on behalf of the U.S. Government before the Supreme Court, or Verrilli, and the Obama administration, are so politically fearful of staking out principled positions that they have opted for a muddled middle ground. Perhaps it's a little of both.

Regardless, if the Windsor and Hollingsworth cases should establish a constitutional right of same-sex couples to marry, as urged by attorneys Ted Olson (R) and David Boies (D) in their Prop 8 Supreme Court brief [PDF], it will be despite the half-baked arguments presented by the Solicitor General, not because of them...