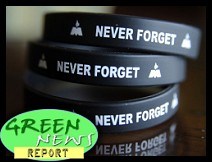 IN TODAY'S RADIO REPORT: Breaking: 'Catastrophic' sewage spill in TN; Running out of ideas: Japan dumps tons of radioactive water into the ocean as their nuclear nightmare continues to continue; The one year anniversary of the Upper Big Branch Mine Disaster in WV; Guess what's the fastest growing sector of the economy? (hint: that big glowing ball in the sky) ... PLUS: Transocean execs recieve safety bonuses --- less than a year after 11 men died on their rig in the Gulf ... All that and more in today's Green News Report!

-- By Brad Friedman and Ernest A. Canning

As The BRAD BLOG reported over the weekend, an internecine firefight has blown up among progressives who support the candidacy of Marcy Winograd against entrenched "Blue Dog" Jane Harman (D-CA), and Rep. Lynn Woolsey (D-CA), long regarded as one of the more progressive members of the U.S. Congress.

Woolsey, the co-chair of the Congressional Progressive Caucus (CPC) and a longtime Advisory Board Member of Progressive Democrats of America (PDA), stunned progressives over the last several days when it was revealed that she was endorsing, and would be participating in a fundraiser for Harman next Saturday, January 16th, as noted in our report yesterday.

In the wake of Woolsey's curious support for the seven term Democrat, PDA is issuing an email blast to supporters tonight, asking them to sign on to an open letter (posted in full below) demanding Woolsey withdraw from the upcoming event, as well as drop her endorsement of Harman who will be challenged this year by Winograd, a longtime leader in PDA's Los Angeles chapter, and the first candidate of 2010 to be endorsed by the group. Winograd ran an unsuccessful challenge against Harman in 2006, but has begun her campaign earlier this year, and hopes to capitalize on growing progressive outrage at entrechned Congressional Democrats such as Harman. In a recent letter to supporters, Winograd described Harman as "the Joe Lieberman of the House."

In the open letter posted here, initially signed by Tim Carpenter, PDA's National Director, Mimi Kennedy and PDA's Advisory Board Chair, the group, describes the process signing the letter as "painful," but describes the negative response from members to the Woolsey endorsement of Harman, and asks for her to withdraw from the event immediately.

"The tone and emphasis of the responses vary, but the overwhelming gist is clear," Carpenter and Kennedy write to Woolsey, "The progressive base is upset about your scheduled involvement [in the January 16 fund-raising event] and hopes that you will withdraw from this event. As an organization, Progressive Democrats of America joins in that request."...