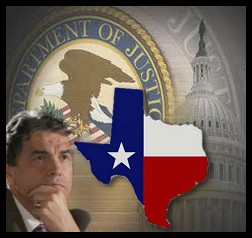 Attorneys for U.S. Congressman Mark Veasey (D-TX) and other plaintiffs have filed an Emergency Application[PDF] with the U.S. Supreme Court, seeking to restore a lower court ruling that struck down the law last week as intentionally discriminatory and an unconstitutional poll tax. That initial U.S. District Court ruling was subsequently stayed by the 5th Circuit Court of Appeals earlier this week.

Veasey's application was followed by the filing of another Emergency Application [PDF] by the United States Department of Justice (DoJ). Both were filed with Justice Antonin Scalia who oversees the 5th Circuit. Scalia has instructed the DoJ to respond by 5p ET on Thursday.

Both applications to SCOTUS were filed in the case of Veasey v. Perry in which a U.S. District Court, after a full trial on the merits, imposed a permanent injunction, preventing the State of Texas from implementing the nation's strictest photo ID law, Senate Bill 14 (SB 14).

The District Court determined that, if implemented, SB 14 could disenfranchise more than 600,000 registered Texas voters who are disproportionately black and Hispanic. The District Court not only ruled that SB 14 violated the U.S. Constitution, the Voting Rights Act (VRA) and amounted to an unconstitutional poll tax, but expressly found that it was passed as the result of deliberate and willful racial discrimination.

The emergency petitions ask that the Supreme Court lift the U.S. 5th Circuit's 11th hour stay of the injunction so as to prevent electoral chaos and confusion in the rapidly approaching November election. In the first petition, the Veasey plaintiffs argue that what the 5th Circuit did in this case --- stay a permanent injunction that was issued on the basis of a District Court finding of intentional discrimination after a full trial on the merits --- was "virtually unheard of" in the annals of American jurisprudence.

Plaintiffs contend that the 5th Circuit misapplied a leading Supreme Court case, Purcell v. Gonzalez [PDF] (2006) pertaining to the issuance of injunctions on the eve of a pending election. That case does not, as the 5th Circuit ruled, mandate a per se rule that always precludes changing a law immediately prior to an election. The DoJ contends that no such per se "rule exists, and the court of appeals clearly and demonstrably erred in failing to apply the established stay factors."

Instead, plaintiffs forcefully argue, "The Purcell principle", mandates that an appellate court give deference to the factual findings of the District Court. The 5th Circuit, they add, erred by ignoring the requirement of Purcell that Texas prove it would likely succeed on an appeal. The 5th Circuit also erred, they say, because it failed to balance the state's allegations about possible confusion that might ensue from implementing pre-SB 14 law against the "actual" confusion, chaos and mass disenfranchisement that the District Court, based upon uncontested evidence, concluded would occur if SB 14 is enforced in the November 4th election (early voting begins in TX on October 20th).

"Imagine that a state passed a law, six months before an election, stating that 'Negroes cannot vote,'" the plaintiffs write. "It would be ludicrous for an appellate court to turn around and stay that injunction because of some per se rule that election laws can never change immediately prior to elections"...

Just over a week ago, it was North Carolina legislators ordered by the court to cough up documentation relating to passage of new, draconian restrictions on voting rights in their state. Now, legislators in Texas are facing much the same thing, as that state's extreme polling place Photo ID restrictions also face legal and Constitutional challenge.

By way of an eight-page Order [PDF] issued late last week, U.S. District Court Judge Nelva Gonzales Ramos has directed the State of Texas to serve upon the U.S. Department of Justice (DoJ) documents that relate to the question of whether "state legislators, contrary to their public pronouncements, acted with discriminatory intent in enacting SB 14," the Lone Star State's polling place Photo ID restriction law.

That law had previously been found to be discriminatory against minority voters in TX, and thus rejected by both the DoJ and a federal court panel as a violation of the Voting Rights Act (VRA). It was then re-enacted by the state of Texas almost immediately after the U.S. Supreme Court gutted a central provision of the VRA in the summer of 2013.

As reported by The BRAD BLOG last September, the DoJ, and Rep. Marc Veasey (D-TX), filed separate federal lawsuits (now consolidated into a single case, Veasey v. Perry) in which they allege that the Photo ID law enacted by the Texas legislature (SB 14) violates another section of the VRA, Section 2, as well as the U.S. Constitution.

The documents in question, created by Republican officials and lawmakers, which must now be turned over to the court, may shed light on the actual intent of those officials in enacting the restrictive voting law...

Greg Abbott, the Lone Star State's Attorney General, made a fool out of himself recently when he issued his public response to a U.S. Dept. of Justice lawsuit challenging the Texas Republicans' new polling place Photo ID law as a violation of the Voting Rights Act (VRA) and of the U.S. Constitution.

The "facts" he publicly offered in the law's defense were wholly misleading and, worse, plainly inaccurate. But if Abbott thought that was embarrassing, he may have no idea what he's in store for when he actually shows up in a court of law, seeking to defend the Photo ID law which Texas Republicans enacted in 2011 as part of a desperate attempt to cling to power.

Rapidly shifting voter demographics are quickly working against the Lone Star Republican Party. The numbers are leading them into a panic over an ever-increasing minority population and rising voting rates to go with it. So they have been, since 2005, attempting to squelch the inevitable by trying to tamp down minority turnout any way possible. But Texas Republicans are not only in a battle with demographics. The key facts about the Lone Star State's Photo ID restrictions --- as already determined in a court of law --- are not on their side either.

In both United States v. Texas, the DoJ's newly filed legal challenge to the Texas Photo ID restriction law, and in Veasey v. Perry, a separate federal lawsuit filed by Rep. Marc Veasey (D-TX) and later joined by Dallas County, the plaintiffs not only set forth allegations but facts already found to be true last year by a unanimous three-judge U.S. District Court panel.

Those already established facts reveal that the state's Photo ID law (SB 14) violates the Equal Protection Clause of the 14th Amendment to the U.S. Constitution because it imposes unreasonable, and often impossible, burdens upon the right of the poor to vote that would likely result in disenfranchisement. The three judge panel further found, via "undisputed record evidence", as they described it, that a disproportionate percentage of poor Texans who would be subject to such disenfranchisement are Hispanic and African-American.

At the time, however, despite establishing those uncontested facts, those Constitutional concerns were not the basis of the case in front of the federal court in question. But they are now.

Given the Lone Star State's acknowledgment during the previous litigation that it could not contest the facts already on record, the Texas Republicans' gambit to try and turn back time at the polls, or, at least, slow it down as the demographic clock continues to tick against them, is exceedingly unlikely to work. Here's why...