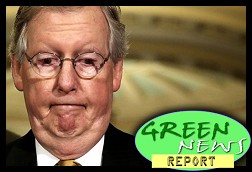 "If we do not seize this unique moment in our constitutional history to reform our surveillance laws and practices, we are all going to live to regret it," Sen. Ron Wyden (D-OR) warned during a lengthy but powerful speech before the Center for American Progress on Tuesday.

In his remarks, Wyden, who has served on the Senate Intelligence Committee since January 2001, left no room for anyone to doubt the liberating impact of the recent revelations by former NSA contractor Edward Snowden. For years, Wyden said, he had wanted to expose the extent to which the Executive Branch of our government and the leaders of the "intelligence community" had deceived the public about the NSA's domestic surveillance programs, but, due to Senate's rules in regard to classified material, he was "not even allowed to tap the truth out in Morse code."

That roadblock has been removed. "The disclosures by an NSA contractor lit the surveillance world on fire," Wyden told the assembled students, journalists and policy wonks yesterday. "Several provisions of secret law that were secret were no longer secret, and the American people were finally able to see some of the things we [he and Sen. Mark Udall (D-CO)] had been raising the alarm about for years."

That alarm centered not only on the unprecedented extent of the NSA's still-expanding, domestic surveillance capabilities but also, as he explained, on the unnecessary and dangerous, post-9/11 development of a secret system of laws that threatens to eradicate the very essence of democracy and accountability.

These provisions, he warned, allow "the Executive to secretly follow a secret interpretation of the law under the supervision of a secret, non-adversarial court and occasional secret Congressional hearings"...