We try like crazy to avoid sleazy, tabloid sensationalism on The BradCast. But, at this point at least, the Republican Party has made that pretty much all but impossible. Just covering any of the latest actual, legitimate news from the party which seems to be in free fall right now, necessarily requires a whole bunch of sleazy, cheap, tawdry stories that sound sensationalistic and tabloidy...but that's only because they are...whether we like it or not. [Audio link to today's full show is posted below this summary.]

On the way to the central story in our A Block today, regarding the stunning crash and burn of Alabama's Sec. of State who, until late yesterday was likely to have been a front-runner for the U.S. Senate seat being vacated next year by Republican Senator Richard Shelby, we are forced to reference a number of the sleazy cheap stories that have now become central to the GOP itself...above and beyond their nationwide attempt to suppress Democratic-leaning voters in a democracy...

On today's BradCast, we cover a number of disturbing new stories highlighting how Donald Trump's Administration --- while everyone is distracted by his is obnoxious, racist tweets and occasionally by his felonious criminal behavior --- is absolutely hollowing out the U.S. Government to the detriment of public safety and the cheers of industry special interests. Oh, and we cover some of his criminal behavior as well. [Audio link to show follows below.]

Among the stories covered on today's show...

Had a jammed-packed BradCast on KPFK/Pacifica Radio today.

We led off with the breaking news of Obama finally seeing the light on marriage equality.

Then I was joined by Sacramento, CA Registrar of Voters Jill Lavine to discuss the thousands of fraudulent voter registration forms turned in by the GOP-hired firmed Momentum Political Services, as we detailed late last week. Lavine tells me that she's confident that in her nine years as Registrar, there has been no in-person impersonation at the polling place, despite the continuing pattern of GOP voter registration fraud in the state and the Republican push to disenfranchise (largely Democratic) voters by claiming, disingenuously, that polling place Photo ID restrictions have anything to do with "voter fraud".

We then enjoyed a quick visit with the lovely Desi Doyen from the Green News Report, fresh off her guest-hosting gig this afternoon on The Young Turks (I'll try to post that video soon!)

Finally, since it's called The BradCast, I was joined by Brad Jacobson to discuss his terrifying new report at Alternet on the "ticking time-bomb" that is the precarious Spent Fuel Pool --- now fully exposed, 100 feet off the ground in a listing building --- at Fukushima Daiichi's reactor #4. His report should scare the hell out of you. It certainly does me. And the scariest part: It's being covered by virtually nobody in the mainstream corporate media. I guess that's what The BradCast is for.

Regular friendly reminder: I don't post ALL of my KPFK shows here, but you can subscribe to the RSS feed to get 'em all, or stop by the KPFK BradCast archives anytime. 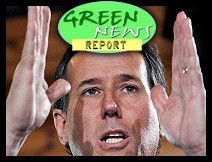 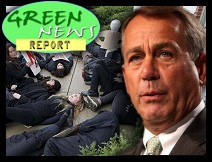 IN TODAY'S RADIO REPORT: Arsenic and other tasty toxins contaminate groundwater near coal plants; Use less gas, pay more!; Bizarre meltdown at the Nuclear Regulatory Commission; BP gets a license to drill --- again --- in the Gulf of Mexico; Solar surges in 2011; PLUS: "Human oil spill" outside House Speaker John Boehner's office ... All that and more in today's Green News Report!

IN 'GREEN NEWS EXTRA' (see links below): What the Frack?: Add Quakes to Natural Gas Rush; Wisconsin Mine Plan Prompts Backlash; Exxon Mobil predicts surge in hybrid vehicles; Putting US Farmland on a Fertilizer Diet; Killing of Wolves From Air Draws Fire ... PLUS: Facebook Unfriends Coal, Partners with Greenpeace for Clean Energy Future ... and much, MUCH more! ... 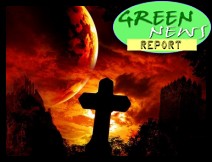 IN TODAY'S RADIO REPORT: Big Oil's big subsidies survive the Senate; Federal investigators find "deviant practices" by Massey Energy; Faulty equipment at Japanese nuke plant also installed at US nuke plants; PLUS: It's the End of the World as we know it! So drive safely! ... All that and more in today's Green News Report!

In light of the new admission by the Tokyo Electric Power Co. (TEPCO) that at least one reactor at its Fukushima Daiichi nuclear plant in Japan appears to have experienced a meltdown of its radioactive fuel core, comes this report from the New York Times yesterday...

Despite repeated assurances that American nuclear plants are better equipped to deal with natural disasters than their counterparts in Japan, regulators said Thursday that recent inspections had found serious problems with some emergency equipment that would have made it unusable in an accident.
...
The briefing was part of a review requested by the commissioners to evaluate the vulnerability of American reactors to severe natural disasters like the ones that hit the Japanese plant in March.

Marty Virgilio, the deputy executive director of the agency, told the five commissioners that inspectors checked a sample of equipment at all 104 reactors and found problems at less than a third of them. The problems included pumps that would not start or, if they did, did not put out the required amount of water; equipment that was supposed to be set aside for emergencies but was being used in other parts of the plants; emergency equipment that would be needed in case of flood stored in places that could be flooded; and insufficient diesel on hand to run backup systems.
...
The two-hour briefing given to the five-member commission was an early assessment, 30 days into a 90-day review being conducted by an N.R.C. task force.
...
[Massachusetts' Democratic Congressman Ed] Markey pointed out that in the last eight years, the commission had received 69 reports of inoperable diesel generators at 33 plants, with six of those generators out for more than a month. The diesels provide power for water pumps that allow removal of “decay heat,” the heat that fuel generates even after a reactor shuts down. The Fukushima plants shut down successfully but decay heat wrecked their cores.