Wow. These CBS/Katie Couric interviews on the economy with Sarah Palin are breathtaking. Cafferty's response afterwards is, on the other hand, a breath of fresh air in the corporate media.

If any serious John McCain supporter can claim, with a straight face, to actually have no problem voting for this woman for President, as that's what she's ostensibly running for, I'd sure like to hear it.

As it seems very few saw these when they originally aired (during the bailout panic last week), perhaps they need a bit more play. My god. Seriously, take a look at these...

Little wonder, then, that even rightwingers, after looking at this stuff, are starting to face reality, and call for Palin to be dropped from the ticket.

On CNN, Jack Cafferty was at least as alarmed by the interview as I was, noting on air that "If John McCain wins this woman will be one 72-year-old's heartbeat away from being President of the United States. And if that doesn't scare the hell out of you, it should." Take a look at his reaction...

CNN's Jack Cafferty calls Dennis Kucinich a "feisty little dude" for taking MSNBC to court for excluding him from the Democratic debate tonight in Las Vegas. A judge agreed that it would be unfair to exclude Kucinich and ordered MSNBC to allow the Congressman to debate. MSNBC has appealed that ruling and the hearing is ongoing.

The viewer E-mail in the second half of the Cafferty File is interesting as well. One viewer suggests that war profits by MSNBC parent company GE were driving the effort to exclude Kucinich from the debate. And the final viewer email by Tony poignantly answers Cafferty's questions about whether the courts should intervene in such cases:

Why not? There is precedent. Remember December, 2000 when the courts effectively selected who should be the President of The United States.

To which Cafferty responds, "Yes they did".

UPDATE: Glenn Greenwald has much more on the Kucinich debate controversy.

He's taking mail on the question right now to read on the air during Blitzer's Situation Room.

You can send him email here. "Should electronic voting machines be outlawed?"

UPDATE: Here's the transcript of today's show. The snippet from that transcript, including the questions Cafferty ended up reading on the air, is posted below...

This was buried in the earlier piece concerning Lou Dobb's coverage of Electronic Voting in which his report alleges that these machines and the private company's that now control our vote are a "threat to democracy". But the later CNN segment with Jack Cafferty deserves to be front and center.

Said Cafferty yesterday (complete must-read transcript of the segment is below!):

"The arguments against the machines include these: they're vulnerable to software tampering, they don't keep an easily recountable printed record, and they may miscount, switch or not record votes at all. Other than that, they're great.

Defenders of these machines say that most of the problems occur because of hasty setup or poor training of poll workers. What's the message there, that it's OK as long as it's one of those two reasons?"

THANK GOD someone in the MSM finally gets it! Lord knows Wolf doesn't! See the full transcript below for answers from emailers to Cafferty's question-of-the-day yesterday: "Do you trust the honesty of America's election process?"

Regular BRAD BLOG readers won't be surprised at the answers sent in. Only that CNN actually read them on air! (Thank you, Jack Cafferty!) 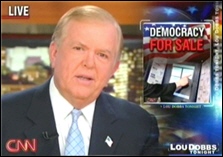 Yesterday on the Lou Dobb's Show on CNN, Lou's crack reporter, Kitty Pilgrim did the second of a two-part (with more to come we hope) report on the ownership of Sequoia Voting by a foreign conglomerate that is directly owned by Venezuelan nationals with direct ties to the Hugo Chavez regime.

It was fun to see Lou all blustery and nearly spitting as he decried the fact that the US government had allowed a foreign owned company to buy a company that supplies voting machines to states and counties.

===
ADDITIONAL THOUGHT FROM BRAD: It should also be pointed out here, when the questions/concerns about Sequoia's ownership are raised, that it's no different from the "local" privatized ownership of all of the other companies, such as Diebold, ES&S, etc. They are equally, if not more, partisan and their privatized (and secretized) ownership of our public elections should be of equal concern to Lou Dobbs, and all other, mostly rightwingers, who are suddenly concerned about the ownership of Sequoia!
===

A transcript of the show follows but a lot is missed if you cannot watch the video above.

Also Jack Cafferty asked about the honesty of the election process in his "Cafferty Files" segment on CNN's "Situation Room".

===
UPDATE: Tonight on Lou Dobbs - Warren Stewart, Legislative Director from VoteTrustUSA and a poll worker in the Bay Area in CA. and Avi Rubin, Computer Scientist and possibly a poll worker again this year in Maryland.
===