[This article now cross-published by The Progressive...] 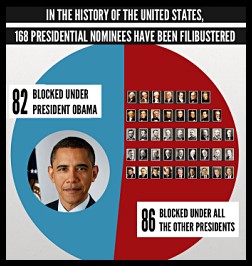 By a majority vote of 52 to 48, the U.S. Senate changed their rules to partially end the filibuster, invoking what some refer to as the so-called "nuclear option". The rule change, which will permit an up-or-down majority vote on all Presidential nominations for executive and judicial office (with the exception of Supreme Court nominations), is better described as the "democracy option".

The rule change, for now, would have no effect on the use of the filibuster by the minority to block legislation. Three Democrats, Carl Levin (D-MI), Joe Manchin (D-WV) and Mark Pryor (D-AR), voted with Republicans to sustain the previous filibuster rules, last changed in 1975 when the Senate amended their Standing Rules to reduce the number of Senators required for cloture --- to end debate --- from two-thirds to three-fifths.

Although there had been noise, and urging from many quarters, for a dramatic change of the filibuster rules for some time, especially after Senate Minority Leader Mitch McConnell (R-KY) drew the dubious distinction of becoming the first U.S. Senator in history to filibuster his own bill, the impetus became particularly strong over the past several weeks with the outrageous block put on the nominations of every one of President Obama's nominations to the important D.C. Circuit Court of Appeal, the court which oversees federal regulations.

The result of yesterday's rule change in the U.S. Senate could well be a return, at least in part, to the Constitutionally designed functions of three different branches of government, as envisioned by our founding documents. It may also mark an end to a thirty-year scheme by Republicans to pack the courts with radical, right wing jurists...

Guest Editorial by Ernest A. Canning 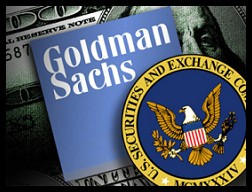 It is perhaps useful to think of the Wall Street executives who swindled their own investor/clients and nearly devoured the world's economy as predators.

One response to their predations has been exemplified by the Occupy Wall Street "move the money" campaign in which billions of dollars have been transferred from the "too big to fail" Wall Street banks to local banks and credit unions. Another response has come from former Wall Street broker/dealers, who, repulsed by a fraudulent system that created and sold toxic assets to unwitting investors even as their firms bet against the assets, opted instead to become independent Registered Investment Advisors (RIAs) who will only accept fees from their own investor/clients to whom they owe a fiduciary duty to disclose all potential conflicts of interest.

Introduced by Rep. Spencer Bachus (R-AL), the Chairman of the U.S. House Financial Services Committee and the number one fundraiser from commercial banks, finance/credit companies, and mortgage bankers and brokers during the 2011-2012 election cycle, the so-called "Investment Advisor Oversight Act" of 2012 (H.R. 4624) claims that it is meant "to amend the Investment Advisers Act of 1940 to provide for the registration and oversight of national investment adviser associations."

In reality, however, the bill represents nothing less than an effort by the Wall Street wolves to drive off these financial shepherds so that they may feast on a field of unprotected sheep (the consumers of financial products)...