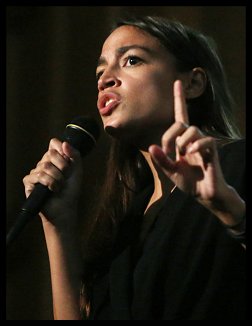 When, in 2015, former President Jimmy Carter told talk show host Thom Hartmann that the United States had become "an oligarchy with unlimited political bribery", he did so in relation to the impact of the U.S. Supreme Court's infamous 2010 decision in Citizens United --- a decision that removed virtually all restraints on corporate campaign donations. This, the 39th President asserted, has produced "a complete subversion of our political system".

"Complete" but not irreversible.

While sometimes difficult to notice amidst our Trumpian nightmare, the U.S. is, nonetheless, in the midst of what 2016 Presidential candidate Bernie Sanders described as a "political revolution" that strives to diminish the grip of corporate wealth at the polls via grassroots-funded progressive candidates who refuse to accept corporate money. Progressive activists and candidates have been succeeding by utilizing every inexpensive means of communication available to ordinary citizens that does not entail the inordinate expense of political advertising via the corporate-owned mainstream media. It is a task that has been most effectively taken on by a younger generation of adept, tech savvy activists and candidates.

While overcoming the power of corporately-powered political propaganda during the 2018 midterm election, a newly elected class of young progressives recently entered the U.S. House of Representatives only to be confronted with a second obstacle: the insidious reach of corporate lobbyists…

On today's BradCast: Political earthquakes. Several of them. All shaking up the political world just within the past 12 to 24 hours. As if we needed still more chaos. [Audio link to show follows below.]

We do our best to navigate through as many of those temblors --- one or two of them quite encouraging, the rest, not so much --- as possible, with the help of our guest today, JOHN NICHOLS, longtime progressive champion and Washington Correspondent for The Nation.

Among the several earthquakes covered today: Antonia Ocasio-Cortez, a 28-year old Latina and political novice unseated Democratic Rep. Joe Crowley, the fourth most powerful Democrat in the U.S. House, by a huge margin (some 15 points) during Tuesday's midterm primaries in New York's 14th Congressional District. The defeat of a 10-term incumbent, previously thought to have been a potential future Speaker of the House, by a self-described Democratic socialist who raised and spent millions less than Crowley, has sent shockwaves through the Democratic establishment.

"When we vote, this is what happens," Ocasio-Cortez declared today after her stunning upset victory, following on the heels of her viral campaign video in which she declared the race "about people versus money. We've got people, they've got money." In the strongly Democratic district in Queens and The Bronx, she is almost certain to win this November.

Also on Tuesday night, a federal judge in San Diego --- a George W. Bush appointee --- issued a ruling requiring the Trump Administration to reunite families separated at the border within 30 days or less. (Within 14 days, if children younger than 5 are included.)

On Wednesday, however, things to several turns for the worst. First, the stolen 5 to 4 majority on the U.S. Supreme Court, in yet another far-right ruling overturning decades of established law, struck down so-called agency fees that public sector unions had been allowed to charge non-union members in exchange for representing them in collective bargaining negotiations. Though federal law still requires that non-union members receive the same pay and benefits as union members, the Court's final ruling issued before Summer recess means public sector unions are likely to lose millions of dollars and hundreds of thousands of members. The decision is seen as a huge blow to labor and a long-sought victory for Republicans. In her dissent to Justice Samuel Alito's majority opinion finding the 40-year old violated First Amendment free speech rights of non-union members, Justice Elena Kagan charged her GOP colleagues with "weaponizing the First Amendment" for political purposes. "At every stop," she charged in her opinion, read from the bench, "there are block-robed rulers overriding citizens' choices. The First Amendment was meant for better things."

But the day's largest earthquake, by far, came shortly thereafter, as 81-year old Justice Anthony Kennedy, a conservative Ronald Reagan appointee, who was often the swing-vote on issues such as abortion, gay rights and other progressive causes, announced he would be retiring at the end of July.

Nichols, author of The Horsemen of the Trumpocalypse, helps us navigate all of the above today, with analysis and insight on all of today's political earthquakes, as well as my argument that Senate Democrats must now follow the so-called "McConnell Rule" --- which Senate Republicans used to prevent a vote on Merrick Garland, President Obama's nominee to fill a vacant SCOTUS seat, for nearly a year in 2016 before it was ultimately filled by Trump's nominee Neil Gorsuch in 2017.

Not only must Dems insist on no voting on any Trump nominee to SCOTUS until after the November Election and the seating of the next Senate, just as McConnell and the Republicans did in 2016, but since Repubs unilaterally changed the Senate filibuster rule in order to force Gorsuch's confirmation through with a bare majority, Dems should consider walking out entirely --- for months, if necessary --- if the absence of a Senate quorum might prevent a vote on whoever Trump nominates to fill Kennedy's seat.

Yes, shut it all down, if necessary. As I argue today, the stakes are now that high. In order to prevent the further erosion of enumerable long-held American rights and values, Democrats now need to put it all on the line in advance of the 2018 midterm primary, which could flip the balance of the upper chamber to the Democrats. Nichols responds with his own thoughts in response to my assertion, and much more --- including on some of the otherwise very good news for progressives from Tuesday's primaries...