US Attorney General Eric Holder, in a stunning move, threw out the government's corruption case against Stevens last April and issued the following statement:

After careful review, I have concluded that certain information should have been provided to the defense for use at trial. In light of this conclusion, and in consideration of the totality of the circumstances of this particular case, I have determined that it is in the interest of justice to dismiss the indictment and not proceed with a new trial.

WaPo failed to report that William Welch is currently under criminal contempt of court for his role in the case against Stevens. Welch was also involved in the prosecution of former Alabama Governor Don Siegelman. Siegelman was convicted of bribery in 2006 and served nine months in prison before his release was ordered pending appeal.

Despite Welch's pending legal issues, his name continues to be listed on recent filings in Siegelman's case. Siegelman finds this "quite curious as he's been hot after my prosecution for a good long time now."

Aside from alleged governmental misconduct in the Siegelman case, there are paramount legal issues that have been recognized by 91 former State Attorneys General and a group of First Amendment law professors across the country. And yet, while the DOJ is making a point to review Republican cases, not one case against a Democrat has been completely overturned and, as Siegelman told me in a recent interview, he believes very little has changed at the department, other than the names "at the top"...

The Division of Elections has almost concluded an initial count of absentee, early in-person and questioned ballots Tuesday. That, coupled with the numbers culled from Election Day, gave Begich a 3,724-vote lead over Stevens, the 40-year Republican incumbent, with about 2,500 ballots left to count.

As the counting continued of the 90,000 previously uncounted votes in Alaska today (a full third of the total votes cast had remained untabulated), Democratic Anchorage mayor Mark Begich has now taken a three vote lead over the convicted Republican felon Sen. Ted Stevens who had previously led by some 3,200 votes.

The latest vote tally from the Alaska Division of Elections shows Begich, the mayor of Anchorage, leading Stevens with 125,019 votes to 125,016. If Begich prevails he would be the first Democrat in Alaska elected to the Senate since the 1970s.

As predicted, the previously-uncounted early and absentee ballots were likely to favor the Democrat. Looks like they have. RAW STORY has MSNBC's video coverage here...

Three U.S. Senate seats remain up for grabs still, in Alaska, Minnesota, and Georgia. Should all three go to the Democrats --- and at least two of them, AK and MN, are looking increasingly likely --- they would have the 60-vote, filibuster-proof majority in the next Congress (as long as you include Joe Lieberman) that we first discussed last week.

UPDATE 11/13/08, 10:10am PT: We're playing catchup on the numbers this morning, but as of late last night, Nate Silver reports at FiveThirtyEight.com, Begitch had opened up an 814 vote lead over Stevens with the remaining, uncounted ballots largely from Dem districts. Details... 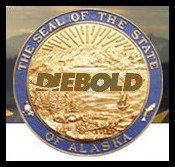 ANCHORAGE - It doesn't bother me to have fundamental differences with people. If it did, I'd never get out of bed. The person I most respected growing up, my Pop, was and is a conservative ideologue. I'm crazy about him. Disagreeing with facts is fair and healthy. Arguing from a place lacking intellectual curiosity is quite another as nothing is learned nor gained.

Since my first post questioning the voter turnout and other anomalies in Alaska's election, I've been accused of all sorts of things. I have been misquoted in the Anchorage Daily News. They claimed I wrote the election was "stolen." I wrote "Stolen Election in Alaska?" It wasn't the word, it was the punctuation.

But there is good reason to be concerned. A lawsuit filed in 2006 in State Superior Court to release the Diebold GEMS Software from 2004 revealed the database had been tampered with. Unfortunately, the user log-in and password were set to the default settings so it was impossible to tell who had edited the software numerous times post election, since all entries were made by "administrator" with password: "password". So it's not too outrageous for anybody to believe it's important, this time, to pay very close attention to the results of last Tuesday's election...

This just in from Alaska, where thousands of new ballots continue to be found each day, since it was first reported that turnout in 2008 was 11% lower than in 2004. Thousands of ballots, nearly a third of them, remain uncounted nearly a week after the election. Their numbers could explain the strange results so far in races --- such as those of the felonious Sen. Ted Stevens (R) and the under-investigation Rep. Don Young (R) --- for which pollsters had predicted decisive losses for the Republicans.

Even with the newly acknowledged ballots and even with Alaska's once-popular Gov. Sarah Palin and popular Sen. Barack Obama both on the Presidential ballot this year, turnout numbers still remain slightly below those from 2004. The Anchorage Daily News, with numbers somewhat out of date from those now posted below, called it all "puzzling" over the weekend, and pointed out much of what we've detailed here in previous posts.

The following updated numbers come from the DNC's Alaska Communications Director, Kay Brown late this afternoon [emphasis in the original]...

( 32 so far... )
Article Categories: Diebold/Premier, Election Irregularities, Alaska, Election 2008, Barack Obama, Sarah Palin, Ted Stevens
FILIBUSTER-PROOF DEMOCRATIC MAJORITY BEGINS TO LINE UP IN U.S. SENATE
Still-Outstanding Races in AK, MN, & GA May Well Add Up to 60 Seats for Democrats IF The Elections Are Counted As Per the Voters' Intent...
By Brad Friedman on 11/6/2008 3:54pm PT

In case you haven't been able to keep up with the barrage of reporting here over the last 48 hours --- concerning serious election irregularities in various races around the country --- allow me to connect at least the dots that may well add up to a filibuster-proof Democratic majority in the U.S. Senate.

Now that challenger Jeff Merkley (D) has been declared the winner (at least by the media) over incumbent Sen. Gordon Smith (R) in Oregon, the Democrats have currently been named the winners in enough elections U.S. Senate races that they will have at least 57 seats when President-elect Barack Obama takes office next January.

There remain, however, three U.S. Senate races still in serious contention, all of which, there is very good reason to believe, may end up going to the Democratic candidates if serious attention is given to issues of election integrity in each of those races. Setting aside whether or not a filibuster-proof majority in the Senate is a good or bad thing, the undecided races at this hour --- in Alaska, Minnesota, and Georgia --- are quickly summarized below, along with links to more detailed coverage, for your convenience...

( 34 so far... )
Article Categories: Diebold/Premier, Election Irregularities, Georgia, Alaska, Election 2008, Minnesota, U.S. Senate, Al Franken, Ted Stevens
SOMETHING SMELLS VERY FISHY IN ALASKA
Turnout Rate Reported as Lowest Ever in State, Down 11% From '04 Even With Both Palin and Obama on the Ballot
Hanging in the Balance in the Diebold State: Felon Ted Stevens' U.S. Senate Race, Corrupt Don Young's House Race & Much More...
By Shannyn Moore on 11/6/2008 1:18pm PT

ANCHORAGE - Something stinks. Not just an ordinary low tide smell. Not like something you’d blame on the dog. It smells like an infection. For me to plug my nose, I’d have to overlook some curious facts.

In Alaska, more people voted for George W. Bush in 2004 than for Sarah Palin on Tuesday despite an identical 61-36 margin of victory. Yes. Only four years ago 54,304 Alaskans got off their sofas and voted for Bush, but decided to sit home and not vote for Palin in 2008.

In turn, I have to ignore the 30,520 Alaskans who felt progressive enough in 2004 to vote for John Kerry, but weren’t inspired enough to get out and vote for Barack Obama.

I would have to glance past the 1,700% increase in the Democratic caucus in February, the 20,991 newly registered voters, and the three largest political rallies in Alaska’s history.

I would also have to forget the people I stood in a long line with to early vote. It would be helpful not to know every other presidential election since Alaska began keeping records has had a larger turn out than the one we just had with our own Governor on the ticket. Try not to remember 12.4% more Alaskans showed up for the August primary as compared to four years ago, before the Palin nomination. Don’t think about the Lower 49’s record voter turn out this year either. Try to delete the memory file, though difficult, that 80% of us approved of Sarah Palin just two months ago.

And as if all of that doesn't stink enough, we still don't know who won the Ted Stevens U.S. Senate race, the Don Young U.S. House, or even the race for Mayor of Anchorage and most curiously, why turnout this year was down 11% from 2004, even with Alaska's own previously-popular Governor on the ticket, and passions for Obama here and everywhere else, extraordinarily high...