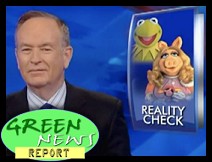 IN TODAY'S RADIO REPORT: Republicans taking hostages over Keystone XL pipeline --- again; Banner year for Big Oil profits --- again; Chevy Volt cleared of all charges; Florida invaded by snakes (no, not the GOP primary); PLUS: The Muppets Strike Back (at Fox 'News') ... All that and more in today's Green News Report!

I'll be joined by GLENN GREEWALD, Salon's great blogger, constitutional attorney and author (of How Would a Patriot Act?

We'll be picking up where things left off a bit, following my interview last week with "Pentagon Papers" whistleblower Daniel Ellsberg and the extraordinary events that have happened since, as the all-out assault on WikiLeaks --- by the U.S. Government, both major political parties and, most disturbingly, the media --- continues to grow.

See Greenwald's piece last week at Salon on Sen. Joe Lieberman "emulating Chinese dictators" by what seems to be an abuse of his post as Chair of the Senate Homeland Security Committee in helping to intimidate WikiLeaks' Internet server Amazon.com into shutting them down, and some in the MSM's support of the notion that WikiLeaks is the bad actor here, despite having broken no laws and being charged with no crime.

That was last week, and things have gone quickly downhilll from there, with U.S. colleges warning students not to read or link to WikiLeaks, Government agencies (including the Library of Congress) restricting access to them, PayPal cutting off their account, and now even Switzerland freezing their defense fund account.

This seems to be all out "Information/Cyber War", at the very least, and like nothing we've ever seen in this country. Greenwald has more on all of this today, and it's chilling --- particularly his UPDATE on that link.

We'll talk LIVE about all of that and much more on today's show beginning at 3pm PT! Please tune in live here...

POST-SHOW UPDATE: The complete interview with Greenwald follows. Lots of interesting stuff to dig into. Enjoy...

Sen. John McCain (R-AZ) says "comity" in the must-see clip below, but "comedy" might have been more appropriate in regard to Sen. Al Franken's (D-MN) shut down of Sen. Joe Lieberman (WhoKnows-CT), as Franken was presiding over the chamber, which left us laughing out loud, and applauding quietly to ourselves. (Via TPM with more background)...

And, if you missed it earlier this week, Franken's take-down of Sen. John Thune (R-SD) is an absolute must-see as well. Though we've had our own beefs with Franken's politics over the years, we must concede that it's frickin' awesome to finally see and hear someone --- anyone --- speak this way in the U.S. Senate. We'd be delighted to see 60 more just like him! Check it out if you haven't seen it already (and again, TPM has more background)...