We raise a whole bunch of topics and news from the weekend for conversation with listeners on The BradCast today, but most wanted to only to discuss the Trump Administration's twisted demand that schools reopen next month for in-person classes, even as COVID-19 cases are now exploding around the country. [Audio link to show is posted below.]

Florida, on Sunday, reported a record 15,300 cases. That's a larger single day record than any state in the nation. It is more than either California at its recent peak or New York at its peak back in April. The news of Florida's quickly worsening crisis comes just days after the state announced that all schools in Florida must reopen for in-person classes for all, five days a week, despite concerns expressed by local school officials.

As Florida shattered the national record, many states, most controlled by Republican Governors, continue to hit new seven-day rolling average records of new cases (even as testing plateaus or even decreases in some states), California, with its Democratic Governor is spiking as well. Governor Gavin Newsom in the Golden State on Monday declared that bars, indoor dining at restaurants, hair and nail salons, churches and gyms would all be shut down again in counties that are the hardest hit. Los Angeles and San Diego County both announced that the school year will reopen with remote learning instead of in-person classes, to the great relief of teachers who are, overwhelmingly, against reopening school campuses.

Donald Trump's Secretary of Education, meanwhile, appeared (poorly) on the Sunday news shows, to insist that schools must reopen, or face lost federal funding, while admitting she has absolutely no federal plan for what do when coronavirus spikes occur. That, she said, should be left to local officials --- the same local officials that she and Trump are hoping to force to reopen schools next month, even as a new Kaiser Family Foundation analysis finds nearly 1.5 million teachers (one in four) are older than 65 or have health conditions that place them at higher risk of serious illness should they contract COVID-19.

At the same time, oddly enough, Admiral Brett Giroir, the federal government's coronavirus testing coordinator, warned on ABC News' This Week on Sunday that the U.S. shouldn't even be thinking about how to get kids back into the classroom until we get the virus under control. "When we get the virus more under control," he said, "then we can really think about how we put children back in the classroom." We suspect the Admiral may not be in his position very much longer. People who tend to tell the truth are not particularly welcome in the Trump Administration.

Getting the virus under control, of course, as Democratic House Speaker Nancy Pelosi pointed out over the weekend, is made all the more difficult, if not impossible, because the federal government is still failing --- more than four months into this crisis --- to ensure adequate testing kits or personal protective equipment (PPE) as cases spike, hospitalizations surge and the death rates began to climb in every region of the country over the past two weeks.

Trump's plan to pretend that everything is somehow normal in time for the November 3rd Presidential Election is beginning to look a whole lot like genocide or at least mass murder, as a whole bunch of callers today seem to agree. (I wanted to hear from those who disagreed with me. None of them were willing to call in for some reason, even though they frequently email me after the show. Cowards.) 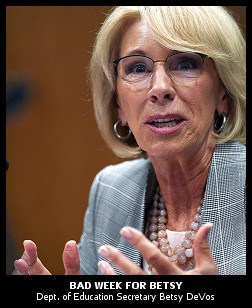