The BRAD BLOG Needs YOUR Support!...
All of work, including The BRAD BLOG, The BradCast and Green News
Report, is made possible only by contributions from readers and listeners!
Latest Featured Reports | Friday, September 30, 2022

PLEASE CLICK HERE TO HELP US WITH A (MUCH-NEEDED) DONATION to celebrate 1000+ episodes of independent, listener-supported climate, energy and environmental news! Thank you!
Listen online here, or Download MP3 (6 mins)...

IN 'GREEN NEWS EXTRA' (see links below): How a coronavirus stimulus package could bolster the economy and save the planet; What Covid-19 tells us about tackling the climate crisis; Utilities beginning to see the load impacts of COVID-19; Scientists discover massive new vulnerability in Antarctic ice sheet; Removing 81 dams is transforming a California watershed; Trump taps former attorney of wildlife trophy hunting group for key wildlife job... PLUS: Africa’s mountain gorillas also at risk rrom Coronavirus... and much, MUCH more! ...

IN TODAY'S RADIO REPORT: Puerto Rico still in the grip of crisis, six months after Hurricane Maria; New documents reveal Trump's FEMA failed to respond to calls for assistance; Your bottled water is likely contaminated with microscopic plastic; Congress rejects Trump's EPA budget cuts again in federal spending bill; PLUS: Another charismatic species slips into extinction because of humans... All that and more in today's Green News Report!

IN 'GREEN NEWS EXTRA' (see links below): Why Are There Suddenly So Many Nor'Easters?; Oil Companies Conveniently Think Climate Science Stopped in 2013; Public lands are being sold in secret on the internet; Major insurers lost billions on natural disasters in 2017, they say climate change a ‘serious’ risk; Global Carbon Emissions Hit Record High In 2017; Flooding And Heavy Rains Rise 50% Worldwide In A Decade, Figures Show; Tougher Climate Policies Could Save 150 Million Lives, Researchers Find... PLUS: America's Misguided War on Childhood Lead Exposures... and much, MUCH more! ...

On today's BradCast: Big wins for Democrats, a public face-plant for a renowned GOP "voter fraud" fraudster, more on Irma's historic devastation, and the scientific facts behind what helped to make it so devastating, from someone who actually knows. [Audio link to full show is posted below.]

Before we get to the increasingly disturbing situation on the ground following Hurricane Irma in Florida and elsewhere --- and why that storm and Harvey before it were so terrible in the first place --- a few news items of note today. First up: Democrats took over two different state legislative seats in special elections wins on Tuesday, one in Oklahoma and one in New Hampshire. Both races were in districts that Trump won by very large margins last November. The victories for Dems --- including huge reported vote swings from R to D --- are of a piece with a series of other special elections held so far this year, including four in Oklahoma alone.

In, yes, related news, former President Jimmy Carter offered some noteworthy statements on North Korea that President Donald Trump may wish to notice, and also some words about worldwide democracy and the need for public oversight of ballot counting.

In the meantime, following some wildly misleading claims about stolen elections and "voter fraud" in New Hampshire from Kris Kobach, the vice-chair of Trump's so-called "Election Integrity" Commission and Sec. of State of Kansas, panelists and members of his own commission, including NH's own Sec. of State, blasted the GOP "voter fraud" fraudster, to his face, during the Commission's second public meeting, held on Tuesday in...NH!

While Republicans are very quick to use even the most sketchy threads of "evidence" they can possibly discover to claim that our democracy has fallen victim to a massive Democratic "voter fraud" conspiracy --- and that we must take radical steps to prevent it, even if it means millions of our fellow citizens lose their RIGHT to vote --- there is, apparently, a very different standard for "evidence" when it comes to climate change. On that, decades of peer-reviewed evidence and tens of thousands of studies don't seem to do the trick, for some reason. That evidence, is simply dismissed by the GOP's fossil fuel-funded cronies. Now it's costing the U.S. --- and the planet --- bigly.

After an update on the death toll and deteriorating conditions in some parts of Florida following Hurricane Irma, we're joined by Penn State University climate scientist and author DR. MICHAEL E. MANN, to discuss what made Hurricanes Harvey and Irma so historically extraordinary (and deadly) and why now is absolutely the right time, despite claims to the contrary by top officials in the Trump Administration and their fellow wingnut denialist community, to discuss the growing impact of our climate crisis and the relationship between that and hurricanes, flooding, wild fires, drought and more across the globe.

"In a word, warmth," Mann tells me when I ask him why Harvey and Irma, from a meteorological perspective, were so uniquely devastating. "Warm oceans mean more moisture in the atmosphere, moisture that's available for record rainfall like we saw in Harvey. It also means greater intensification of these storms --- and indeed, we saw the most intense hurricane ever in the open Atlantic, Irma, at a 185 miles per hour."

Mann goes on to explain how the U.S. is "falling behind" Europe when it comes to investment, and accurate results, in climate and weather forecasts; responds to critics who use "straw men" and denial to "muddy the waters" and "poison the well"; draws an interesting parallel between Superstorm Sandy and the Sandy Hook mass murder, in response to those who say "now is not the time to discuss climate"; explains why he believes, as a professor of meteorology, there are still so many broadcast meteorologists in the dwindling denier community (and casts some of the blame for that on his own Penn State); and why he feels that recent comments about climate change from Sen. John McCain may offer reason for optimism.

"Ironically, the era of Trump, as adverse as it might feel when it comes to climate action, may ironically be creating a divide within the Republican Party that could end up leading to a governing coalition for action on climate," says the ever optimistic Mann near the end of today's conversation...

IN TODAY'S RADIO REPORT: Ad wars: Clean energy advocates want you to vote --- so the fossil fuel industry is attacking them; Colorado's highest court overturns local fracking bans; Big climate victory for kids in court in Washington State; Big conservation victories for lions and elephants; PLUS: Kenya's big bonfire of the ivories - to stop illegal trade and save elephants... All that and more in today's Green News Report! 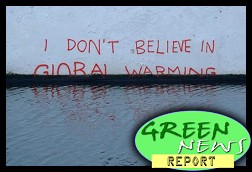 IN 'GREEN NEWS EXTRA' (see links below): Obama: Fossil fuels are here to stay; Targets of climate hate mail rally to support one another; Coal terminals and climate chaos: is this the future we want?; WA State moves on its own to stop ocean acidification; How Oil Drilling Is Like the "Civil Rights Revolution"; Extreme El Nino events to double ... PLUS: Big Green to Obama: "All of the above" a compromise we can't afford ... and much, MUCH more! ... 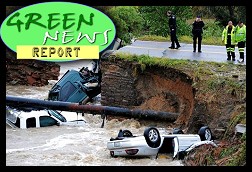 What kind of a pathetic, backwards, third-world country would allow this sort of thing to happen?

Just in from BBC [emphasis added]...

Kenya's electoral commission has said that a computer bug is to blame for a large number of rejected votes in the tallying of the presidential election.

Issack Hassan said the computer was multiplying each rejected vote by a factor of eight.

This led to huge disputes and allegations of fraud.

Vote-tallying has been restarted by hand following this and other glitches but Uhuru Kenyatta still has a large lead over Prime Minister Raila Odinga.
...
"For any rejected vote for any candidate, they were being multiplied by eight," said the Independent Electoral and Boundaries Commission (IEBC) chairman.

Ah, yes. An imperfect version of "Democracy's Gold Standard" (publicly hand-counted paper ballots at the precinct --- so, perhaps we'll call what they'll now be using in Kenya the "Silver Standard") to save the day again.

How long before folks realize that's the way that every self-respecting, self-governing democracy ought to be counting ballots in their elections in the first place?

* * *
Please support The BRAD BLOG's fiercely independent, award-winning coverage of your electoral system, as available from no other media outlet in the nation --- now in our TENTH YEAR! --- with a donation to help us keep going (Snail mail, more options here). If you like, we'll send you some great, award-winning election integrity documentary films in return! Details right here... 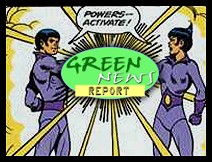 Reports of hundreds dead in violent riots following Kenya's recent Presidential election continue. In the contested race, the incumbent President Kibaki was announced the winner, despite "pre-election opinion polls and early media tallies" which suggest that the challenger, Odinga, should have won.

Of particular note however, was this instructive graf, from AFX News Limited's coverage over the holiday, which caught our eye...

[Chief EU observer Alexander Graf Lambsdorff] said his mission had evidence of presidential tallies announced in polling stations on the election being inflated by the time they were released by the electoral commission in Nairobi.

Got that? Because results were announced at the polling place before being sent away, it was possible for there to be checks and balances by election observers against the official central count as released, and possibly gamed, by the centralized election officials.

We'd hope the above point will be carefully noted by folks like Ohio SoS Jennifer Brunner, who has recently recommended against decentralized precinct-based counting, in favor of central county-level counting (see our recent exclusive interview with her on those points); those who have been pushing for all Vote-by-Mail elections of late; and those folks who are monitoring Iowa's caucuses on Thursday.