NOTE: Those subscribed for free via iTunes should now be receiving automatic downloads again! We believe we've found the problem (a single bad character in the RSS file!) that's been holding up the subscriber feed for a number of weeks! Please let us know if it's fixed or still a problem! - BF 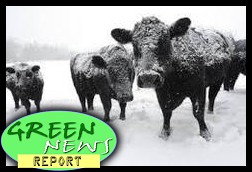 [Ed Note: Phil - We have very few rules for commenting at The BRAD BLOG. One of them is that you pick a name and stick with it. I came very close to deleting this comment for that reason. Either use your original name, "Phil", when posting here, or you will not be allowed to post here in the future. Thanks! - Brad]

Brad can interview them about the EPA false science and being a proxy for the UN Agenda 21?
But it's more likely Brad will have forgotten to pack a tuna fish sandwich after getting stuck in traffic for three days, that he didn't believe could happen like good little Feinstein professional journalists.

quote:
“Americans are pissed, truckers are pissed, and our legislators are operating unconstitutionally. If the federal government or their fascist partners in corporate trucking think they can stop any trucker or citizen from participating in this national event, then they are in for a big surprise. I would LOVE to see the DHS sort out who in the big traffic jams across america is a protestor or simply stuck in traffic. Washington DC will merely be symbolic and a photo opportunity in our nation’s capital — as far as I am concerned, we don’t even need Washington DC or those corrupt politicians to even run this country (they run it into the dirt is all they do). I am calling upon every single American in every city with every vehicle to get out on the road in support of out truckers & the U.S. Constitution. Let’s show these bastards who runs this place — they will NEVER be able to control a nationwide protest. We are demanding that Congress follow the US Constitution immediately; comply with our lawful demands, or their refusal will cause a shutdown. They either follow along with the plan by October 11th or they will be personally responsible for shutting our system down — they have a choice, but one of them is not to continue to operate lawlessly after October 11th. We have one shot at doing this peacefully; lawfully and constitutionally, but if we do NOT rise up, the alternative is a horrifying collapse and a violent revolution.”

I liked the quotes you posted Des ... specifically those that Secretary Kerry made at APEC.

New developments in genetics and microbiology indicate that we may be adversely altering our human genome along with other genomes in our world.

Altering them with our industrial pollution.

On this occasion, my wife and I were directly affected by the Salmonella outbreak, but fortunately, not "infected." We had to toss out chicken we'd recently purchased.

Published in the journal Nature today:

"The coldest year in the future will be hotter than the hottest year in the past [150 years]," said Camilo Mora, lead study author and a geographer at the University of Hawaii, Manoa.