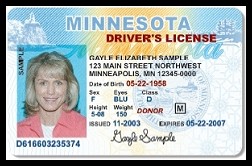 A little more than four months ago, when The BRAD BLOG first covered the ACLU's legal challenge to the deceptive ballot language that the MN GOP state legislature had used to describe its polling place Photo ID restriction initiative on the November 6 ballot, we expressed the concern that the legal challenge might succeed before the MN Supreme Court, yet fail in the court of public opinion. At the time public opinion polls revealed that 80% of Minnesota voters favored the amendment. We were wrong on both counts.

In August, a divided MN Supreme Court rejected the ACLU's challenge to the language used in the ballot question. By late September, the once popular "Photo ID needed to stop voter fraud" scam had become well enough debunked by so many that, as we we noted at the time, support for the misleading measure in the Land of 10,000 Lakes had "cratered" in public opinion polls there. And, finally, yesterday, MN voters reportedly rejected the Photo ID amendment by a decisive margin of 54% to 46%.

In our original coverage, we cited Mark Twain's famous quip that "a lie can travel halfway around the world while the truth is putting on its shoes," and the pervasive failure of the mainstream media to expose the truth about the GOP's "Big Lie" about pretend "voter fraud." But we had underestimated the extent to which legal challenges to Photo ID and other forms of GOP voter suppression, especially in Pennsylvania, would compel MSM coverage and educate the public...

The truth has put on its shoes

In our initial coverage, we had observed that the voters of Minnesota, of all people, should have seen through the "voter fraud" canard. After all, it was Sen. Al Franken (D-MN) who so thoroughly demolished the credibility of top GOP "voter fraud" fraudster Hans Von Spakovsky and his "voter fraud" canard during the September 2011 hearings before the U.S. Senate Judiciary Subcommittee on the Constitution, Civil Rights and Human Rights. The hearings were convened in response to the billionaire Koch brothers-funded, Paul Weyrich co-founded American Legislative Exchange Council (ALEC)-fueled GOP effort to enact new state voting restrictions across the country.

During those hearings, Loyola Law Professor Justin Levitt, in his written testimony, revealed that there had been nine "possible" cases of in person voter impersonation since 2000, out of more than 400 million votes cast. "Americans are struck and killed by lightning more often," Levitt quipped.

While this was more recently followed by John McCain's former campaign adviser Steve Schmidt's admission that GOP claims of widespread voter fraud were a myth, the critical feature in the Pennsylvania case was the combination of the widely publicized fact that the Keystone State's Photo ID law could disenfranchise as many as 1.6 million eligible voters and Republican state Rep. Mike Turzai's boast that, by passing the Photo ID law in the legislature, the state GOP will deliver the Keystone State to Mitt Romney. The PA GOP had revealed, to all who were paying attention, that Photo ID laws have nothing to do with preventing "voter fraud" and everything to do with securing a GOP victory by disenfranchising legal minority, elderly, student and poor (read: Democratic-leaning) voters.

Kudos to the good citizens of Minnesota for seeing through the lie.

* * *
Ernest A. Canning has been an active member of the California state bar since 1977. Mr. Canning has received both undergraduate and graduate degrees in political science as well as a juris doctor. He is also a Vietnam vet (4th Infantry, Central Highlands 1968). Follow him on Twitter: @Cann4ing.
* * *
Please support The BRAD BLOG's fiercely independent, award-winning coverage of your electoral system, as available from no other media outlet in the nation, with a donation to help us keep going (Snail mail, more options here). If you like, we'll send you some great, award-winning election integrity documentary films in return! Details right here...
Tweet
Reader comments follow below ad...

« PREVIOUS STORY "PRESIDENT RE-ELECTED, CALLS FOR ELECTORAL REFORM AT TOP OF VICTORY SPEECH"
» Go to The BRAD BLOG front page «
"The Day After: About Those Voting Machines..." NEXT STORY »

An interesting link to the results in Minnesota

The Local Unions and the AFL-CIO had a lot to do with getting the message out on both props. That and being a strong Union State.

The MN voters did more than that. They reaffirmed it with a total takeover of the Legislature. It is now ALL democratic. Kudos to Gov Mark Dayton for leading the way, standing firm against repugs when he had to, and not getting flustered when they tried to pull the bs that they do.

You are quite right, Stymie, Democrats regained control of the MN state legislature. However, I think that may have been more a response to what Gov. Dayton described as a legislative gridlock occasioned by the 2010 'Tea Party' takeover that included a 20 day shutdown of state government over budget disputes.

Here, in CA, for the past two decades, the minority GOP repeatedly caused havoc every time we needed to pass a budget, courtesy of a rule that required a 2/3 legislative approval for any revenue enhancing legislation.

As in MN, GOP austerity tactics produced a blowback. CA has now elected super-majorities in both houses of the CA legislature.

Unfortunately, despite the draconian assaults on unions and budgets, WI just returned control of its state Senate to the GOP.