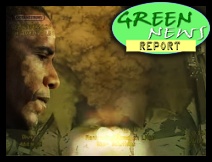 IN TODAY'S RADIO REPORT: So far, so good: the 'Top Kill' said to be working; Federal heads are rolling; the President is speaking (finally), and extending the moratorium on off-shore drilling... PLUS: It's official: the BP Oil Disaster is now the Worst in U.S. History ... All that and more in today's Green News Report!

« PREVIOUS STORY "Toon of the Moment: 'What Could Possibly Go Wrong?'"
» Go to The BRAD BLOG front page «
"FBI: O'Keefe DID Plan a 'Wiretap Plot' to Secretly Record Employees of U.S. Senator" NEXT STORY »

How can we monitor this so-called moratorium?

Good question, Lora. No doubt we can count on the MMS regulators to do that for us, right?

Too big to fail. Too deep to drill. And, as applied to Massey, BP and Wall Street, too crooked to trust.