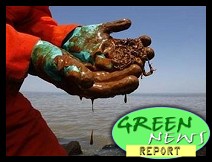 « PREVIOUS STORY "Super-ish Tuesday: Tale of the Turnout"
» Go to The BRAD BLOG front page «
"Federal Judge Dresses Down O'Keefe, But Lets Him Avoid Trial for Tampering with Senator's Phone" NEXT STORY »

This is a watershed moment that is being lost for lack of leadership.

And we are supposed to be comforted that the tar balls washing up on Florida and in North Carolina at Oak Island are not from this spill, they're from another?!?!?