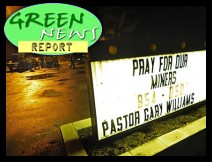 Welcome aboard to our latest new affiliate partner: Rational Broadcasting in Dallas!

IN TODAY'S RADIO REPORT: Another mining tragedy in Coal Country and the unspeakable failures of Massey Energy's CEO Don Blankenship; Oil spill on the Great Barrier Reef... PLUS: ExxonMobil paid zero in federal taxes on their $45 billion profit last year!...All that and more in today's Green News Report!

Thanks to the Thom Hartmann Program for additional audio clips!

I thought it important, DES, to point out that Massey Energy, violator of so many safety laws, is also the key mover in mountain top removal.

As explained by Michael Rozelle of Climate Ground Zero on Democracy Now, the practice has already caused:

about 2,000 miles of West Virginia creeks have been buried under these landfills, and over 500 mountaintops have been blasted away. It’s about—in our part of the country, that’s about 50 percent of the land area in there. So, right now, they’re trying to expand these existing mines, and if they are successful, they will eventually all connect to each other, and most of the mountains in that part of the state will be gone in another ten years.

Massey is truly the worst of the worst.