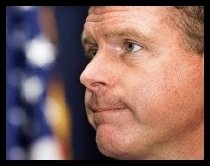 Republican Congressman Tom Feeney, rated by nonprofit watchdog group Citizens for Responsibility and Ethics in Washington (C.R.E.W.) as one of the "most corrupt members of Congress" for three years straight, has been defeated in Florida's 24th district. Regular readers of The BRAD BLOG readers know Feeney as the man who allegedly asked computer programmer Clint Curtis to write vote-flipping software in 2000 and escaped all accountability in an investigation stacked with Jeb Bush loyalists. (Full Curtis/Feeney scandal story summarized here, indexed in full here, new documentary film about the terrifying story here.)

According to the official FL Sec State website, as of 9:25 PM Eastern time, Feeney is losing to his Democratic challenger, Suzanne Kosmas by 19 percentage points--59% Kosmas, 40% Feeney. While we here at The BRAD BLOG are of course saddened that it was not Clint Curtis himself --- who left the Republican party after his dealings with Feeney and ran as a Democrat to unseat him in '06 and again in '08 when he lost in the primary --- who finally ended Feeney's ruinous reign, hey, any way we can get rid of Feeney, we'll take it. Of course, Kosmas is a corporate blue dog Dem with ethics issues of here own, as we've discussed here previously, but at this point we'll take the lesser of two evils and happily discharge Mr. Feeney. Here are your walking papers, sir. Job poorly done. Now Go Away. Hopefully to jail. Until then, we're sure he'll land in a cush lobbyist gig within a week.

In other great news, Congressman Robert Wexler is projected to win Florida's 19th district handily with 69% of the vote. Wexler, one of the few Congressional Democrats with teeth, has been a proponent of impeachment and accountability for the Bush administration. His return to Congress to finish his work is a very good thing indeed.

For more info on The BRAD BLOG's continuing investigative series on The Clint Curtis/Tom Feeney/Yang Enterprises Vote-Rigging Scandal series, please see:
- A Quick Summary of the story so far.
- An Index of all the Key Articles & Evidence in the series so far.
In late 2008 a documentary film, Murder, Spies & Voting Lies: The Clint Curtis Story was released. More info on the remarkable film here.

Jim,
It's great news that it looks like Feeney is going to lose. Just a reminder though that we don't have verification of results this early and can't say anything definitively. About any race. Anywhere. Well, maybe Dixville Notch.

Now, it's time to get him settled into prison where he belongs.

There is a God!

Feeney did a heck of a job.
whens his day in court?

Now that the election is over, and democrats have controll of the federal govenment, it is time for REAL voter protections.

We need investigations, criminal prosecutions, and REAL solutions to the election systems.

The government is allowed to operate and even exist, through the "consent of the governed". And the only way that the consent is represented, is through the vote.

One last note, ANYONE that has been party to in anyway, cheating the American people from an accurate and honest election, is as UnAmerican as any traitor to the United States.

Exposing this sort of fraud on the American people, and an honest solution to these problems, should be one of the top priorities of the government.

the sad irony is that in defeating feeney ( my district ) voters went to kosmas, who ( and i think she is a pleasant and nice lady ) is a hack! she is more than just a blue dog Dem... she is representative of the Dems who refused to join we who stood on street corners for 3 plus years in protest to the invasion of iraq. she refused to support hearings of inquiry into the run up to the invasion, and she basically supported whatever pelosi said. plus, she is a realtor who could not answer questions of knowing that subprime loans were done through her comnections. she was part of the ' cabal ' that defeated a good and decent man like clint curtis ( i hosted 2 fundraisers for him at my caffe ) with their money money money talks philosophy.
brad, we are lost as a progressive community to have someone like her reperesenting us. rather have the ' enemy i can see ' than one who ' pulls the wool over many eyes '

Mr. Cirile,
While I agree that Congressman Waxman is one of the few members of Congress with the teeth to consistently push for the impeachment of Bush etc., Congressman Waxman recently made a statement that he considers his work done. He is seeking the chairmanship of the finance comittee, and has no intention of pursuing Bush further. What a waste. I recently called his office to voice my displeasure at his statement and his new goals, and told them that if there were ever a time to go after Bush etc., that it was NOW!

Arowland, I said WEXLER, not Waxman. Not quite the same. And yes, Waxman for all his hearings, hasn't done jack shit and has proven yet another pussy. he was supposed to go wide with the Sibel Edmonds allegations and then quashed it (who knows if told to do so by Pelosi?)

Phil, I agree, I worked on the Curtis campaign and know all about Kosmas. She cosponsored a resolution praising Bush for invading Iraq. She's pretty vomitous, in my opinion. And yeah, she is only marginally better than Feeney, and I mean marginally. The point here is that Feeney is gone. Sort of like replacing lung cancer with pulmonary disease I grant you...

Agreed with Jim. Kosmas may suck, but not as vomitously as Feeney. And anyone who confuses Wexler with Waxman needs to watch more C-Span. Or cspanjunkie.org.

Good riddance doesn't quite cover it. Enemy combatant, perhaps? Maybe the one good thing Bush did for Obama was to keep G-Bay open for his detractors.

Democrats are NOT Perfect...K. I live (Lived) in Tom Feeney's district. It is SO Nice to see him GONE. I don't care if Kosmas is a Blue-Cat I want to live in her District instead.. The way I look at things. If you do not like how the Democratic Party is run....Vote Republican.. i am a Proud Democrat Damn it and I am NOT going to say I am sorry for it. Not going to happen....