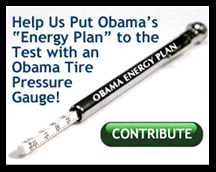 “There are things you can do individually to save energy,” Barack Obama said last week “… Making sure your tires are properly inflated — simple thing. But we could save all the oil that they’re talking about getting off drilling — if everybody was just inflating their tires. And getting regular tune-ups. You’d actually save just as much.”

Despite the fact that even NASCAR extols the gas-saving virtues of proper tire inflation on its website, the McCain campaign spent the early part of this week mocking Obama’s assertion that keeping tires inflated conserves gasoline by selling tire gauges, for a $25 donation, labeled “Obama Energy Plan.”

On Wednesday night, however, during a conference call with supporters, McCain did a complete 180 on tire inflation:

"And could I mention that Sen. Obama a couple of days ago said that we ought to all inflate our tires, and I don’t disagree with that. The American Automobile Association strongly recommends it, but I also don't think that that's a way to become energy independent."

Maybe not, but experts agree that properly inflating tires could make a big difference:

According to the U.S. Department of Energy, "every pound per square inch of tire underinflation wastes 4 million gallons of gas daily in the U.S." Survey information from the National Highway Traffic Safety Administration shows that 27 percent of the cars on the road have a significantly under-inflated tire...

"[The] production offset is ... likely to approach 800,000 barrels per day -– a tidy sum and a worthwhile target for savings, but not equal to [Outer Continental Shelf] output," [wrote Frank Verrastro, Director and Senior Fellow at the Center for Strategic and International Studies (CSIS).]

Keeping tires inflated would have a much longer term benefit than offshore drilling however, because it is a sustainable practice, whereas --- despite Republican talking points to the contrary --- U.S. underseas oil reserves would meet global demand for only seven months:

The Department of Energy estimates that there are eighteen billion barrels of technically recoverable oil in offshore areas of the continental United States that are now closed to drilling. This sounds like a lot, until you consider that oil is a globally traded commodity and that, at current rates of consumption, eighteen billion barrels would satisfy less than seven months of global demand. A D.O.E. report issued last year predicted that it would take two decades for drilling in restricted areas to have a noticeable effect on domestic production, and that, even then, “because oil prices are determined on the international market,” the impact on fuel costs would be “insignificant.”

Predictably, the media are letting McCain's latest gaffe pass, but at least Obama took an opportunity to poke a little fun at his rival. Noting McCain's change of position, Obama said, "It will be interesting to watch this debate between John McCain and John McCain."

The main point, is that McCain said he was going to run a clean campaign, no mudslinging...and he's acting like a 2nd grader on his campaign.

And he's 71 years old, and it's very embarrassing the level he is stooping down to...

Anything I ever *might* have liked about McCain has been compromised. He is now just another republican jackass. Not that I would have ever voted for the old coot.

So liberals can wallow in your ignorance once again

Obama: "Take pride in being ignorant"

The worst part about this fumble from McCain is that proper tire inflation has been touted as a gas-saver for decades. It's one of those things that grandfathers tell young people learning to drive (or at least mine did).

So people heard McCain mocking Obama and it just looked like a man willing to say or do anything to get elected.

I haven't been to this website for a few days, and while browsing, I watched "The One" ad and voted. I was appalled that the vote results showed that most people thought it was a plus for Obama. You couldn't be more wrong. "The One" is code referring to the anti-Christ in the "Left Behind" series of Best Selling Books! It's all a bunch of BS, but to those who've read them, this ad definitely speaks to them, painting Obama in the worst way, using his own words taken completely out of context. This is a very slick and damaging ad.

Anything I ever *might* have liked about McCain has been compromised. He is now just another republican jackass. Not that I would have ever voted for the old coot.

Couldn't hve said it better myself!

Did a search using "John Edwards". Got 37 hits for bradblog on google. Nothing recently however.
If Edwards was a republican, you wouldnt be talking about tire pressure.

Just look at this Your [sic] kidding

"The Brotherhood of the Disappearing Pants"

Actually, while I am personally disappointed with Edwards - mostly because of the political damage, I honestly don't give a rip if he was having an affair - an affair is a personal matter between him and his wife. It doesn't have doodly-squat to do with his policies, or his legislative or executive skills.

Here is the link that was posted here when Eliot Spitzer was busted. Again, I don't give a hoot if Spitzer was frequenting prostitutes, it should be legal and regulated. The problem with Spitzer was that he was busting prostitutes and johns, in fact had made it part of his executive credentials. That's hypocrisy. We don't like it.

I don't like that Edwards lied about his affair, but it's a question that was probably nobody's damn business.

You conservatives are so hell-bent on sticking your noses into other people's private consensual business, it really mystifies me as the country is falling apart around you that you can be bothered with where John Edwards makes his bed.