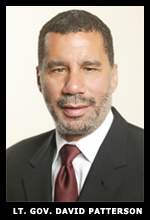 New York's Democratic Gov. Elitot Spitzer has told his top aides that he is involved in a prostitution ring that has been exposed in Washington:

Mr. Spitzer, who was huddled with his top aides inside his Fifth Avenue apartment early this afternoon, had hours earlier abruptly canceled his scheduled public events for the day. He scheduled an announcement for 2:15 after inquiries from the Times.

Mr. Spitzer, a first term Democrat who pledged to bring ethics reform an end the often seamy ways of Albany, is married with three children.

The governor's travel records appear to confirm that he was in the capital when one of the federal prosecutor's male suspects met with a prostitute from the ring.

Should Spitzer step down, he would be replaced by Lt. Gov. David A. Patterson, a Democrat from Manhattan. Patterson is the first African American elected lieutenant governor of New York, and would be the state's first black governor. He is also legally blind.

Spitzer is the one who is legally blind. He should resign now.

It appears that them illegal wire tapperinos are working just fine

I commented about the DOJ connection on an above thread being timed to release this bust at the same time Feinstein is having hearings on them...Scott Horton seems to think it is a set up too.

The wiretap captured a man identified as Client 9 on a telephone call confirming plans to have a woman travel from New York to Washington, where he had reserved a hotel room, according to an affidavit filed in federal court in Manhattan.

Another political hit job by the DOJ

Perhaps we need to setup a whole new communications network outside of commercial (fascist) agenda.

Seems the only way to finally say screw your crap to the corruption.

Wiretap. Fuck, who is next? Maybe some of the idiots that said I don't care go ahead and wiretap.

And what the fuck does prostitution have to fucking do with terrorism?

And on another note, why is prostitution illegal?

sorry I am so pissed off. This is why I want to be like the ostriches with my head buried in some shit that is irrelevant.

a.) I don't think ostriches hide.
b.) hillary said something about frogs boiling, that's non-sense frogs won't boil; however we USE that idea to get IDEAS across even if it isn't based in fact. Turn the heat up on a frog, and it will jump out.

Did Spitzer use state funds to pay for this overpriced lady? It seems like a lot of noise to make just for some politician visiting a hooker. I thought that sort of thing happened all the time.

$2500 does seem a bit steep for your average public official to pay for sex. The news accounts say Spitzer sent cash in advance, which suggests that he made some effort to conceal the source.

And what ever happened to the DOJ assistant John David Atchison whom they had on suicide watch but decided not to watch (or something?)
The press let the Republicans go again like they always do.

A U.S. Justice Department official has been arrested on suspicion of traveling to Detroit over the weekend to have sex with a minor.

Prosecutors said Atchison flew from Pensacola, Fla., to Detroit on Sunday intending to have sex with a 5-year-old girl.

Never forget what Gregory Miller said about the arrest.

Gregory R. Miller, United States Attorney for the Northern District of Florida, stated that he was "deeply saddened by the arrest" adding "we are, of course, concerned about the welfare of Mr. Atchison's family. Our thoughts and prayers go out to them." There was no mention of any concern for Atchison's "plenty" of presumed victims.

Atchison commited 'suicide' or so they say, but he was framed from the get go. Guess he was just one more person who the authorities wanted to get rid of.

Can't find the link right now, but will do a more indepth search when I have time.