Thirteen Democratic Senators have introduced a bill that would outlaw "voter caging," the practice of sending mail marked "Do Not Forward" to a targeted list of voters in hopes of using the returned mailings as a basis to challenge the right of the voters to vote.

The tactic was used by Republican operatives in both the 2000 and 2004 election, despite the Republican party having agreed in two consent decrees in 1981 and 1986 to end the practice.

A press release from Sen. John Kerry's (D-MA) office announcing the new bill is posted in full below.

"The practice of 'caging' is reprehensible and has absolutely no place in our democracy," Kerry says in the statement. "Here in America, every citizen, regardless of race, gender, religion or sexual orientation has the right to cast his or her vote. These are the very foundations of our democracy and this bill will ensure that we protect fundamental freedoms for millions of voters across our country." 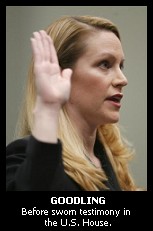 The press release goes on to refer to evidence, much of it reported over the years here at The BRAD BLOG, of GOP vote caging that took place in important swing states such as Florida, Ohio, and Pennsylvania during the 2004 election. Kerry's statement also points out the re-emergence of the topic earlier this year, after former DoJ staffer Monica Goodling testified to a Congressional panel that information concerning the involvement of former Karl Rove associate and GOP opposition researcher Tim Griffin in voter caging had not been fully disclosed during previous Congressional testimony.

Goodling's revelations led to Griffin's sudden (and teary) resignation from his post as interim US Attorney in Arkansas, where he had been appointed by the DoJ under new provisions in the PATRIOT Act allowing such appointments without congressional approval.

The controversial practice of vote caging has been used primarily to target minority voters; evidence has shown that some who ended up on the caging lists were military personnel who were unable to return the mailings because they were deployed in Iraq and Afghanistan.

A DoJ investigation into Griffin's, and the GOP's, 2004 vote caging activities was then demanded by several U.S. senators last June. The American mainstream media have given little coverage to the issue of caging, despite original reporting from Greg Palast and the BBC prior to the 2004 Presidential Election.

UPDATE: Here's the actual bill [PDF]. Looks good from a quick read, though the part that allows the U.S. Elections Assistance Commission (EAC) --- a four-member commission appointed by the President, and which has proven tremendously inept and compromised in all manner of things --- to add new reasons why voters may be challenged is a concern. The EAC shouldn't be entrusted with anything, much less deciding criteria for challenging voters' right to vote. But that's just our knee-jerk opinion.

The press statement from Kerry's office, announcing "The Caging Prohibition Act," is posted in full below...

Washington, D.C. – Senator John Kerry today, along with 12 other Senators, co-sponsored legislation aimed at preventing the practice of “voter caging,” a long-recognized voter suppression tactic which has often been used to target minority voters.

“The practice of ‘caging’ is reprehensible and has absolutely no place in our democracy. Here in America, every citizen, regardless of race, gender, religion or sexual orientation has the right to cast his or her vote. These are the very foundations of our democracy and this bill will ensure that we protect fundamental freedoms for millions of voters across our country,” said Senator Kerry.

Caging is a voter suppression tactic in which a political party, campaign, or other entity sends mail marked “do not forward” or “return to sender” to a targeted group of voters – often minorities or residents of minority neighborhoods. A list of those whose mail was returned “undelivered” is then used as the basis for challenges to the right of those citizens to vote, on the grounds that the voter does not live at the address where he or she is registered. There are many reasons that mail could be returned undelivered, however; an eligible voter could be overseas on active military service or a student registered at a parent’s address.

There is evidence that caging lists were assembled in Florida, Ohio, and Pennsylvania during the 2004 elections, possibly intended as the basis for massive voter eligibility challenges. The Florida incident made headlines again earlier this year during Congress’s investigation into the firing of several U.S. Attorneys, when allegations resurfaced that Tim Griffin, the former RNC opposition researcher then serving as an interim U.S. Attorney in Arkansas, had been involved in an effort to cage voters in Jacksonville.

The Caging Prohibition Act would prohibit challenges to a person’s eligibility to register to vote, or cast a vote, based solely on returned mail or a caging list. The bill would also mandate that anyone who challenges the right of another citizen to vote must set forth the specific grounds for their alleged ineligibility, under penalty of perjury.

It really could be called voter zooing.

I mean "caging" is thinking small.

We are all in the voter zoo.

The EI movement is all about who can spruce up their cage the best.

Hey DREDD, did you ever know Wild Bill in Kodiak?