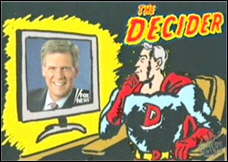 Jon Stewart reports on another important decision by the president. Stewart takes his first shots at Tony Snow as Bush's new Press Secretary.

If this first segment is any indication then Mr. Snow may soon become a favorite subject for Daily Show viewers.

Listen to today's first 5 mins of Democracy NOW! They play Bush commenting on Tony Snow. Bush is obviously joking, and no one is laughing. That's a bad sign for Bush. Remember when everyone laughed when he joked, "No weapons of mass destruction over here!" at that dinner? Also, they play some racist comments from Tony Snow's radio show. This is the United State's new press secretary!!!


Today's FOX News Headlines
---------------------------------
-President Bush carries framing of a house in New Orleans. Bush Lends a Hand in New Orleans
President pitches in on volunteer projects to rebuild homes devastated by Hurricane Katrina
(comment: There was even a BLACK guy next to him in the picture!!!)
•1,102 Sex Offenders Nabbed (comment: sex, disease, and scaring the public...see "Bowling for Columbine")
- Photo Essays: Massive Bust (???)
- Operation Falcon II
•$100 Gas Rebate Mulled
- Relief in Sight?
•Spanish Version of National Anthem Draws Protests
•Iraq VP's Sister Killed (only story that intersects with Democracy NOW!)
-Assassination
•Sago Mine Survivor Says Some Air Packs Didn't Work
•Man Charged With Murder for Tossing Infant From Car (comment: did you know there was a man charged with murder today??? WOW!!!)
•Israel: Iran Missiles Can Carry Nukes, Hit Europe
- Iran: Can't Take Nukes Away
-Casper the Drunken Ghost
Out There: U.K. pub haunted by poltergeist sends cops scrambling (comment: important news that affects us all, on the poltergeist front)
-Dogg in the PoundRapper, five others arrested
after tussle at Heathrow Airport injures seven cops
(comment: not important news that affects us all)


THE REAL NEWS!!!
DEMOCRACY NOW!!!
------------------------
- Bush Introduces New White House Press Secretary Tony Snow
- Snow: Black Underclass “Most Dangerous Thing In Our Lifetime” (comment: really think about this: FOX News is now part of our government)
- Thousands Flee Military Strikes in Sri Lanka
- EU Reports 1,000 Clandestine CIA Flights In 5 Years
- Al-Jazeera Bureau Chief Arrested in Cairo
- FEMA Cutting Back Housing Assistance to 55,000 Families (comment: NOT in the regular news, unbelievably)
- Senate Committee Calls For Abolishing “Beyond Repair” FEMA (comment: was this in the MSM? not sure, I stopped watching it.)
- Human Rights Groups Say Most Detainee Abuse Unpunished
- Jane Jacobs, Author and Community Activist, Dies at 89
-EXCLUSIVE: Nixon White House Counsel John Dean and Pentagon Papers Leaker Daniel Ellsberg on Watergate and the Abuse of Presidential Power from Nixon to Bush (comment: 30 minute live interview... THAT'S ALL!!!)
-The Assassination of Digna Ochoa: A Look at the Life and Death of the Renowned Mexican Human Rights Lawyer (comment: she was murdered, and the government said it was suicide...sound familiar???)

"And so it re-begins" with "Tony Hawk"

This appointment will be another disaster for the Bush team. I give Snow three weeks. Can we start a pool?

What they don't tell you about the picture is that they are stealing a truss for Trott Lent's (an alias of Trent Lott) house.

It was a payoff for not investigating bu$hit's lead up to the Iraq war.

Does Bush look like he has put on a couple of pounds?

The San Ramon, Calif.-based company's net income, reported Friday, translated into $1.80 per share, two cents above the average estimate among analysts polled by Thomson Financial. It compared to a profit of $2.7 billion, or $1.28 per share, in the same January-March period last year.

If not for continuing production problems caused by Hurricanes Katrina and Rita last summer, Chevron said it would have made an additional $300 million _ an amount that would have generated the highest quarterly profit in the company's 127-year history.

Bush should be in Baghdad helping fix what he has done to them (Baghdad Burning).

I Like the cartoon.
Check mine out at
www.RealityChickComix.com (homepage)

Jo-Joy, could it be the BOOZE?

Sure DO miss FreeSpeechTV and DemocracyNow!
(I'm in Jebby's Banana Republic for now, and only get cable)
You should hear my redneck girlfriend (ex-Repug from Georgia) rave about it, now that she's checked it out! Never knew what she was missing.... only watched FUX now to "monitor". :satisfied: