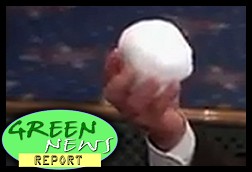 IN TODAY'S RADIO REPORT: A snowball's chance in the US Senate; Warm winter records shattered in the US West; Two big oil companies call for a price on carbon emissions; PLUS: In 1983, scientists predicted global warming would trigger unrest in the Middle East. A new study proves it.... All that and more in today's Green News Report!

IN 'GREEN NEWS EXTRA' (see links below): Hundreds of illegal oil waste pits discovered in CA; Exxon Mobil settles with NJ over toxic waste; Keeping the dust down in Owens Valley, CA; Fracking opponents getting increased scrutiny from police; Flame retardants in hand-me-down foam products ... PLUS: As the Colorado River Runs Dry: Ongoing Battle Between Urban, Rural Water Users... and much, MUCH more! ...