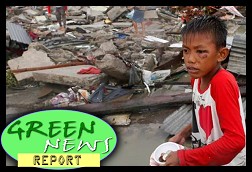 IN TODAY'S RADIO REPORT: The devastation of Super Typhoon Haiyan, and the climate change signal; PLUS: The denial industry sinks to new lows, as the U.N. meets again to hammer out a global climate treaty ... All that and more in today's Green News Report!

IN 'GREEN NEWS EXTRA' (see links below): AP shocked - shocked! - to find corn ethanol is bad; Archbishop refuses communion to polluters; Billionaire Koch Brother says advocates of carbon tax 'are on acid'; U.S. crushes ivory to save elephants from extinction; ARCO to pay $20m to residents near NV copper mine; Fossil fuels receive $500 billion a year in government subsidies worldwide; Another oil train explodes, this time in Alabama ... PLUS: Map: What the U.S. coast will look like after we melt all the ice ... and much, MUCH more! ...