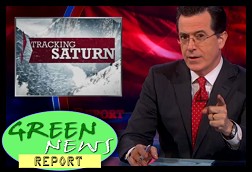 IN 'GREEN NEWS EXTRA' (see links below): Why are sinkholes swallowing Florida?; 'Carbon capture and storage will never pay off'; Jump In atmospheric CO2 brings climate catastrophe closer; U.S. clean energy trade surplus with China; Climate change will open up surprising new Arctic shipping routes; Ice Age study bolsters CO2 and warming link; CA town requires all new homes to have solar power; GOP legislator seeks a new carbon tax on bicycle riders; Infections with 'Nightmare Bacteria' on the rise in U.S. hospitals ... PLUS: Don't Worry: Keystone XL pipeline would be safe from the climate impacts it would cause ... and much, MUCH more! ...

A top military officer says al-Qaeda is not as much of a threat as climate change:


America’s top military officer in charge of monitoring hostile actions by North Korea, escalating tensions between China and Japan, and a spike in computer attacks traced to China provides an unexpected answer when asked what is the biggest long-term security threat in the Pacific region: climate change.

Navy Admiral Samuel J. Locklear III, in an interview at a Cambridge hotel Friday after he met with scholars at Harvard and Tufts universities, said significant upheaval related to the warming planet “is probably the most likely thing that is going to happen . . . that will cripple the security environment, probably more likely than the other scenarios we all often talk about.’’

“People are surprised sometimes,” he added, describing the reaction to his assessment. “You have the real potential here in the not-too-distant future of nations displaced by rising sea level. Certainly weather patterns are more severe than they have been in the past. We are on super typhoon 27 or 28 this year in the Western Pacific. The average is about 17.”

(Qil-Qaeda: The Indictment - 2). The Navy folk at the Pendagon have also been saying that.

The warmonger war industry within Oil-Qaeda is not going to like that.

Another Keystone XL factor is this:


The Keystone XL pipeline, recently approved by the US State Department and awaiting President Obama’s declaration that it is in the “national interest,” will carry oil that is too dirty for the US government to buy — under legislation signed by George W. Bush!

In 2007, President Bush signed into law Section 526 of the Energy Independence and National Security Act of 2007. It prohibits the US government, which is the largest single fuel purchaser in the U.S., from using taxpayer dollars to purchase fuels that have a higher carbon footprint than conventional oil.