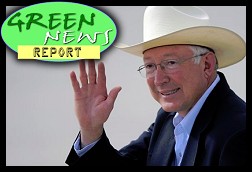 IN 'GREEN NEWS EXTRA' (see links below): Coal exports to Asia: new battle against global warming; Court finds Bush EPA weakened soot regulations; Exploring environmental links to autism; Coal-ash dump leaking into WV neighborhood; Killer bat disease spreads to KY ... PLUS: Why the 'Idle No More' Movement Is Our Best Chance for Clean Land and Water ... and much, MUCH more! ...

« PREVIOUS STORY "Why Isn't 'Tea Party' 'Hostage-Taking' a Crime?"
» Go to The BRAD BLOG front page «
"FL's Rick Scott Calls For 'Restoring Confidence' in the Electoral System He Destroyed Confidence In" NEXT STORY »