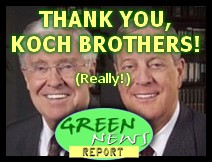 Hey Des, hate to be a party pooper, but...my old man works for the power industry and I've got to agree with him that when you make electric cars, guess where that electricity comes from dear? Now, if you want to talk about the great divestment from fossil fuel and reinvestment in wind, solar, geothermal, and biofuels, then were talking on the same page. Until then, its still just a big ole shekle taking the world down fast.

And yeah, my Dad has passed, so that would be my partner I'm quoting.

Natural gas produced with continued evolution of fracking methods...that is the direction we should go.

Good point, Ancient. The most recent analysis from the Union of Concerned Scientists indicates the carbon pollution footprint of an electric car does depend on how the electricity is generated - but only when compared with super fuel-efficient gasoline-powered cars. Gas guzzlers need not apply.
http://www.nytimes.com/2...g-in.html?pagewanted=all

Coal's share of US energy has already dropped precipitously in just the last few years (now about 35%, down from over 50%) and will continue to do so, as natural gas takes over and more and more renewable energy sources come online. We have a long ways to go yet, but Germany's example shows renewable sources can do it.

Davey, you may be interested to know that the former skeptic in today's report, Dr. Richard Muller, advocates the same thing. See the Rachel Maddow video posted above.

(And thanks --- your comment reminded me to add the video clip!)

when you make electric cars, guess where that electricity comes from dear?

Actually, one has to look at electric cars as only one component of a green technology that entails alternative renewable sources of energy, such as wind, solar, wave, geothermal, etc.

You might want to look at the variety of issues I touched upon in Towards a Practical, Affordable Battery Electric Vehicle - And Full-Employment in a Green Economy

Ernie, have read half way through your article, but took a break to watch Rach. I'll get back to you when I finish.

And that as close to tweeting as I get.

Don't forget the notion of a methane economy, which is a current industry, but with promising technology coming along. Methane can be made out by taking CO2 out of "thin air". Indy cars ran on it until about 2004

Excellent piece Ernie. The jobs growth alone put a big ole smile on my face, and I have to eggmit I was pleased to see GE's ceo's comments. Now, let's hope the rest of the big boys figure out there is actually more profit to be made by taking good care of the planet and her people than the neanderthal thinking of some one lets say who used to run halliberton!

And damn it I'm going to make my partner read your article, cuz every time I try to engage him on these types of issues, I get the response I gave to Des about where do you think the electricity comes from...truth be told. I've always hoped some one would come up with an amplification process, but if a smart grid and recharging stations were to be invested in I agree it would take us a long way into cutting carbon emissions. Good food for thought today folks!

OT Check out what I just bought!

Ancient --
Mitt Romney says that corporations are people.
Crazy, right? Elizabeth thought so too. So she spoke out:
"No, Mitt, corporations are not people. People have hearts, they have kids, they get jobs, they get sick, they love, they cry, they dance, they live and they die. Learn the difference."
Thousands of people like you shared that quote all over the Internet --- so many, in fact, that we decided to put it on our newest campaign t-shirt.
Donate $25 or more to get our special edition “Corporations are not people” Elizabeth Warren t-shirt:


We don’t run this country for corporations. We run it for people.
And now you can show all your friends and family that Elizabeth Warren will fight for people like us.
Thanks,
Mindy Myers
Campaign Manager
Elizabeth for MA

And hey Ernie, did you see in that documentary where the retired shell oil researcher eggmits that shell oil came up with a fuel that got

And the mysterious deaths of the at home mechanics that created engines that also got a hundred miles on water vapor that does not pollute the planet?

Ooops misplaced correction. Personal editing. But if anyone tries to fuck with the creators of that doc. you will answer to me MOTHERFUCKER.

Ya know, industrial country over consumption is the elephant in the room. And I'm a smarter woman than that, and hey boyz... I bet you are too.

Allowing corporate creeps to poison us all is a good place to continue. I miss John, Bobby and Ted Kennedy.

Actually I'm a very nice person, please come down off that sick limb your hanging off of out there.

And oh yeah, never will I forget Jackie O and her sacrifice. In quasi american/world memoriam:

Alrighty then, one last post before I say Night, night folks: