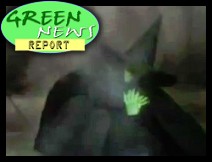 IN TODAY'S RADIO REPORT: Drought expands in the US, and it's gonna cost ya; Obama Admin expands solar lands --- while Fox 'News' whines about it; US Navy's Great Green Fleet sails to success; Heat records shattered in St. Louis; PLUS: Shocking ice melt across Greenland ... All that and more in today's Green News Report!

IN 'GREEN NEWS EXTRA' (see links below): David Letterman On Fracking: 'We're Screwed; Rise in Weather Extremes Threatens Infrastructure; 70% of Arctic ice loss is due to climate change; Could Africa hold the answers to America's drought woes?; U.S. cities unprepared for future heat waves; Winning the carbon tax debate; Geo-engineering, storms may speed up ozone loss ... PLUS: The environment is trying to ruin the Olympics again ... and much, MUCH more! ...

Sigmund Freud advocated the establishment within psychiatry of a system of group psychoanalysis.

The fossil fuel industry is properly diagnosed as psychotic within that framework.