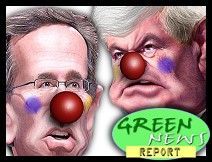 By reducing our deficit in the long term, what that allows us to do is to invest in the things that will help grow our economy right now.
...
We need to restore American manufacturing by ending tax breaks for companies that ship jobs overseas, giving them to companies that are creating jobs right here in the United States of America. (Applause.) That’s something that everybody should agree on.

We need to reduce our dependence on foreign oil by ending the subsidies for oil companies, and doubling down on clean energy that generates jobs and strengthens our security. (Applause.)