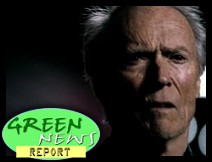 IN TODAY'S RADIO REPORT: Romney and Paul confused about public lands; Wacked-out Winter 2012: Record cold in Europe, record warm in the U.S.; Most anti-environment Republican Party ever; PLUS: Never mind Clint Eastwood's halftime --- it was the greenest Super Bowl yet ... All that and more in today's Green News Report!

Canadian Government Poisoning Wolves to Slow Rapid Declines in Caribou Population Near Tar Sands (Climate Progress) [emphasis added]:
Canada’s caribou population are in steep decline. That’s due in part to the destruction of habitat through logging, expanding tar sands production, and other industrial development in the province of Alberta.

But rather than focus on habitat conservation efforts to protect threatened caribou populations in the province, Canadian officials are poisoning and shooting wolves that prey on caribou.

I think this story shows how desperate Republicans are to see America fail just to prove them "right" ... betting against America isn't going to go over well with non-crazy voters this fall.

If 99% of genetic material in humans is green, why do we act so white? Forked man speaketh with white tongue?