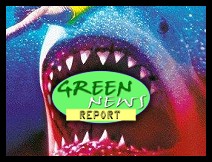 IN TODAY'S RADIO REPORT: Riots over oil in Nigeria; Victory over Big Oil in Ecuador; Curbing drug abuse (antibiotic drug abuse, that is) and antibiotic super bugs(!) in farm animals; Heat wave in Antarctica; PLUS: Mutant hybrid sharks! ... All that and more in today's Green News Report!

IN 'GREEN NEWS EXTRA' (see links below): December 2011 setting heat records; Is there really 100 years’ worth of natural gas beneath the United States? [NO.]; Insurance payouts point to climate change; U.S. coasts unprepared for higher seas; The end of real maple syrup?; EPA regs create more jobs than Keystone XL pipeline; Low income kids exposed to more pollution; Future of a stable climate depends on the 2012 Presidential Election: report ... PLUS: ZOMG! Zomb-bees! ... and much, MUCH more! ...


But make no mistake: This is just a first step, and nothing more.