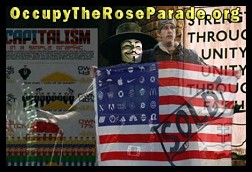 Buried at p. AA3 of the 12/28 LAEXTRA section of Los Angeles Times, beneath the headline, "Occupy protest plan prompts beefed up Rose Parade Security" ("Rose Parade security beefed up as Occupy plans protest" in the online version) one can find news of a significant accord. But you have to read closely.

The Pasadena Police Department and Tournament of Roses officials have agreed to furnish the Occupy Movement with a slot at the end of the parade, according to Los Angeles Times, which adds:

Protesters intend to march with large banners that decry wealth inequality in the United States and to unveil a few colorful "floats" of their own, including a giant people-powered octopus, said Pete Thottam, an Occupy spokesman.

The octopus --- to be made out of recycled bags and stretching 40 feet from tentacle to tentacle --- is designed to represent the stranglehold that Wall Street has on the political process, he said.

Planned speakers include Cindy Sheehan, an antiwar activist who lost her son in the Iraq war; local Occupy activists; and possibly...Michael Moore.

The question now is whether the corporate-owned media will include the Occupy portion of the parade in its televised coverage or cut away to commercials at that point. We'll be watching to find out.

UPDATE 1/2/12: Well, we now have our answer as to whether the corporate TV media covered the huge Occupy turnout at the parade. Your answer is now here...

« PREVIOUS STORY "My Appearance on Thom Hartmann's TV Show Last Night..."
» Go to The BRAD BLOG front page «
"Story of the 2011 Republican Party in One Chart" NEXT STORY »

READER COMMENTS ON
"Occupy Wall Street Allowed Slot in Rose Parade; Will They Be Featured in the TV Coverage?"
(4 Responses so far...)

Thanks for the info Earnie, that is way, way cool.

Yet another blaring example of a misguided waste of time and money...
I suggest "Occupy Soup Kitchen".. a true value to the cause..
http://darryls-soapbox.b...occupy-soup-kitchen.html

In his linked article, Darryl @2, who displays his elitist disdain for the working class with the words, Occupy Soup Kitchen, states:

What if these millions of man hours were allocated to actually improving the human condition?

With all due respect, Darryl, that remark suggests that you are absolutely clueless about the "why" of Occupy Wall Street.

As I previously explained, Occupy Wall Street is a genuine democratic uprising that has emerged from a profound contradiction between America's "promise" and its "reality."

The American "promise" is embodied in the lofty, egalitarian principles of the Declaration of Independence, in the recognition provided by the U.S. Constitution that the purpose of government is to "promote the general welfare," and in the concept inscribed above the portico of the U.S. Supreme Court --- "EQUAL JUSTICE UNDER LAW." The "reality," as noted by former New York Times journalist Chris Hedges, is that political power in the U.S. has been seized by a "criminal class" of rapacious oligarchs, whose radical goal is not merely the ability to carry out their criminal pillage of the economy and the environment with impunity, but the decimation of "all impediments to the creation of a neo-feudalistic corporate state."

By taking on the systemic threat to our economy, our environment and humanity's survival posed by the criminal oligarchs, OWS is investing "man hours...to actually improving the human condition."

Meanwhile, Darryl, perhaps you can inform us about the number of man hours you personally have invested to "improve the human condition," and just what you've done towards accomplishing that task.

Of course they did not allow news coverage! They cut it off right after the last float came into view. We figured that's what they would do but, to the OWS group - GOOD JOB! Maybe it's not the best way to "occupy" their time but I still feel that it's necessary for them to put the pressure on.