<> Please help keep The BRAD BLOG independent! <>
All of our work, including The BRAD BLOG, The BradCast and Green News
Report, is made possible only by contributions from readers and listeners!
Latest Featured Reports | Wednesday, December 7, 2022 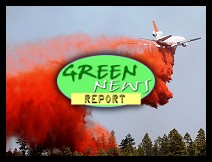 IN TODAY'S RADIO REPORT: The U.S. Forest Service warns AZ's record wildfire is just the tip of the melting iceberg; Now a 2nd study warns warmer winters are the new normal; More bad news for nukes, as Italy votes against them, and a plant in Nebraska is now threatened; PLUS: Ethanol subsidies saved from the chopping block --- for now ... All that and more in today's Green News Report!


"Throughout the country, we're seeing longer fire seasons, and we're seeing snowpacks that, on average, are disappearing a little earlier every spring," he said, as well as devastating droughts. As a result, fire seasons have lengthened by more than 30 days, on average.

"Our scientists believe this is due to a change in climate," said Tidwell.

The climate change deniers remind me of Senator McCain during the 2008 presidential election.

An article at HuffPo by a green activist like yourself points out the myth that climate change is a possible future event.

Climate change is historical, has been happening for decades, is happening now, and will be catastrophic in proportion in the future.

One catastrophic scenario is the flooding of or tornado damage to a nuclear power plant.

This danger is happening now in various places around the nation.