We've been covering this on the Malloy Show, but I haven't been able to keep up with it on the blog, unfortunately. So, this just in:

Monday: Gov 'missing' for six days, didn't tell wife where he was, missed Father's Day with four sons. Wife says he was going off to write, staff says he was hiking Appalachian Trail.
Tuesday: Staff says Gov contacted them, was surprised at the hubbub, would return to office on Wed.
Today: Sanford caught by reporter returning from Argentina, not Appalachian Trail. Presser announced. Sanford admits affair.

All of that follows, of course, on the recent admission by the GOP's other (once) 2012 Presidential hopeful, Sen. John Ensign of Nevada, that he, too, was having an affair. If I have time to fill in more back details here later, with links, I will.

UPDATE: Fox "News" does it again! Labels Sanford as a "(D)" Democrat as he was admitting to affair! Screenshot follows below...

This is not the first time for such an "accident" by Fox. They did the same with Rep. Mark Foley (R-FL) after the revelations about his obscene text messages to under age Congressional pages, as The BRAD BLOG broke back in 2006... 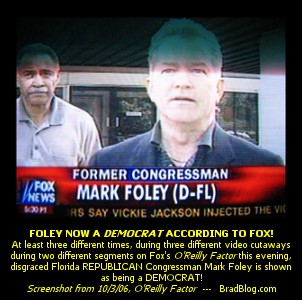 FURTHER UPDATE: Media Matters reminds us of this similar gem as well... And RAW STORY has links to still more such "accidents" by our friends at Fox.

UPDATE 6/25/09: Fox issues a rare apology for identifying Sanford as a Democrat. Video at Media Matters. For the record, they never apologized for Foley, despite having misidentified him as a "D" at least three times during O'Reilly's primetime, the most watched on cable news. As we reported at the time, Fox producers said "everyone knows" Foley is a Republican, so they "didn't feel it was necessary to run a specific on-air correction".

READER COMMENTS ON
"KABOOM: Sanford Was Having an Affair"
(12 Responses so far...)

This story still doesn't add up - I am not buying that we finally got the "full story" and the fact that repugs and pundits are saying what a "big" man sanford is for "coming clean" tells me this is still a circus of lies.

*He has not taken responsibility for his lies - he was testy when he stated that he did not tell anyone he was going to Appalacia - that is just what they assumed based on the information he told them.... yeah, right

*Abandoning your governorship to disappear on a sex-holiday, lying to your staff about it, having your staff lie to your constituents about it, and then not making arrangements to ensure that their was a chain-of-command in place is an impeachable offense.

*What could possibly possess a "family values" man to abandon his wife over one of the nation's family holidays - father's day.

*Was this really a woman?

*His staff has been covering for him for 5 months!

*Given the expense of an international affair - who has been bankrolling this? Does anyone really believe this came out of the sanford's joint checking acount?

the thing that really worries me is, since when has a republiCON ever told the truth, about anything?! What was he REALLY doing in Argentina, and how are the bushite neocon connected to it?

Does it involve committed more war crimes and treason?

Don't cry for him Argentina.

I'm curious, has Fox "News" ever labeled a Democrat as a Republican? If not, I think we can state conclusively they do it on purpose.

ps. Hiking the Appalachian Trail is the new euphemism for a politician cheating on his wife.

YOU GUYS ARE KILLING ME!

Another one...bill clinton eat your heart out lol

Here's what doesn't make sense: if he was fucking around with a whore in Argentina, that means he was too stupid to take any precautions. Apparently, his wife immediately notified the media, suspecting something. Right? Then, he goes on father's day. And doesn't tell his immediate family. This guy is an idiot. The only thing worse, would have been if he web-cammed himself screwing the Argentinian mistress.

Let us not forget that CNN, (The Clinton News Network; yeah right),has done this mislabeling as well.

All evidence seems to have been scrubbed.

I think his wife found out 2 weeks ago and wanted him to leave. So, she knew full well why he wasn't around on Father's Day.

I think it would be VERY interesting to see how the trip to Argentina was paid for.

My guess is it wasn't out of his checking account either.

I wonder if the GOP accountants are busy shuffling funds to cover his ass on that one.

I thought he might have been visiting Kurt Sonnenfeld down there.

Does Sanford have a son that's old enough to run in his place yet? If so, here