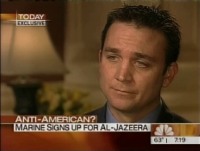 Marine Captain Josh Rushing has taken a job reporting for an Arab news network which is drawing criticism from some conservatives. He was recently interviewed by NBC's Today Show.

The Arab language news network Al-Jazeera has plans to begin broadcasting an English-language channel by Spring of 2006. The network already had 30 to 50 million viewers in the Arab-speaking world. The network has been called propagandists, liars and terrorists by many neocons like Donald Rumsfeld and Fox News pundit Bill O'Reilly. Even so, Al-Jazeera is almost certain to be a popular news alternative for many English-speaking viewers when it launches.

In 2003, the U.S. Military opened the Central Command (CENTCOM) in Doha, Qatar, as a base of operations and a media stage for the Iraq war. Marine Public Affairs Officer Josh Rushing was assigned to be the media liaison for the Al-Jazeera network.

As media liaison for Al-Jazeera, Rushing gained notoriety with the network's audience. Rushing became best known for appearing in the Egyptian documentary "Control Room" which focused on a behind-the-scenes look at Al-Jazeera's reporting of the Iraq war.

Recently, Rushing ended his service with the Marine Corp. and has accepted a job with Al-Jazeera. As America's media has picked up the story, debate over Rushing's relationship with network has increased. Today, the right-wing blogger Debbie Schussel writes:


Rushing was looking for a job because he was essentially fired from the U.S. military after his moronic starring role in the Al-Jazeera propaganda fluff film, "Control Room."

Rushing has the intellect of Anna Nicole Smith and the politics of . . . well, Al Jazeera. Maybe that's why Al-Jazeera just hired Rushing to be it's American propagandist . . . er, correspondent.


I was genuinely thrilled to read that Rushing is continuing his commitment to enlarging his understanding of the Muslim world and its understanding of America by joining Al-Jazeera's new English-language news channel.

USA TODAY's article made it clear that Rushing's decision required both courage and unusual personal integrity. I wish there were many more people like him in the public sphere, and I'm looking forward to watching his continued growth.

Is this former Marine being used by Al-Jazeera for propaganda or is he essentially doing Karen Hughes' job by bringing positive American voices to an Arab-based news network?

« PREVIOUS STORY "Attorney General Gonzales Acts as if He Gives a Damn About Voting Rights..."
» Go to The BRAD BLOG front page «
"Our Place in History" NEXT STORY »

Is this former Marine being used by Al-Jazeera for propaganda or is he essentially doing Karen Hughes' job by bringing positive American voices to an Arab-based news network?

Maybe neither ... maybe he's just going to do some reporting ... What? It COULD happen!!

Being called a propagandist by Rumsfeld or O'Reilly is the same as being called effeminate by Liberace.

Rushing isn't afraid of the truth. This guy is the coolest. I loved him in Control Room, and I love him more today.

As for being called propagandists, Aljazeera gets flak from both sides ... if you watch Control Room closely you will see a scene in which the Aljazeera reporter interviews a Washington analyst who tries to tell him the truth [to wit, the USA is being run by a bunch of radical criminals who are trying to take over the Middle East] but rather than exploring the statement, the reporter shuts down the interview as soon as he can. Apparently, even Aljazeera is afraid of the truth sometimes.

Even the way the NBC clip was presented, of course was very negative on this marine. Fortunately he appeared confident, his interview appeared incredulous.

Again, the US corporate media spin, calling Al Jazeera "Controversial" as though it were fact. Calling it controversial is clearly the opinion of NBC's writers.

Amazingly, Al Jazeera does not just live to bash the US. It reports on many goings on in the middle east.

More power to Captain Rushing and his work with Al Jazeera. Other 'westerners' also work for them as well.

I believe that Captain Rushing should go for it. He just might be able to improve our image in the Middle East, and get the head of some Americans out of the sand. Those who don't approve of his presentations, simply change to a different channel.

I don't see any conflict of interest with Capt. Rushing being employeed there.

Sounds like those accusing are prejudiced toward Al-Jazeera, imo.

When the dumbest political commentator in the country says someone has the intellegence of an Anna Nicole Smith, there are good reasons to take seriously that said intellegence.

I'll make this article not about Rushing but about Scuchel (okay, however you spell it) because frankly, she's the kind that ought to be examined, not Rushing. She represents the insane wing of the Republican cheerleader party; a group that's willing to pounce upon anyone who does anything out of his or her free mind. She also represents the gradual descent of right-wing commentary into idiocy, clownishness and laughable ignorance. The fact that this empty-headed bimbo claims to be a conservative and actually puts her dimwitted thoughts to paper must make true conservatives cringe and sob, perhaps even cry.

Ann Coulter is a crazy woman, but she understands the value of a good punchline. So for her sometimes witty style, she does get a little respect. But she's spawned so many Barbie-brains that want to be just like her that even she must be horrified. Especially this Schuchel woman, who looks just like Barbie would if she ever grew to be middle-aged and unattractive and keen to prove that inside the thing she called her brain were was not the great emptiness that everyone suspected but a capable and working mind.

A fellow Marine seeking the TRUTH,good for him...He sure as shit wouldn't be finding any of it with the Zionist puppets commanding this bloodbath,they can simply GO TO HELL!

Semper Fi ! to our Constitution,not the fucking politicians

What an excellent idea take power away from the Zionist controlled media. If we watch the west’s media and the Arab media we can come to some medium. God Bless Rushing.

« PREVIOUS STORY "Attorney General Gonzales Acts as if He Gives a Damn About Voting Rights..."
» Go to The BRAD BLOG front page «
"Our Place in History" NEXT STORY »
See MSVL and support BRAD BLOG! Click here for signed premium version!