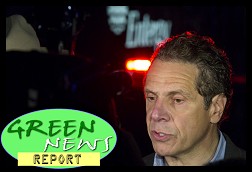 IN TODAY'S RADIO REPORT: Explosion, fire and oil spill at nuclear plant just outside New York City; Here we go again: Shell gets approval to drill in the Arctic this summer; More water restrictions amid California drought; GOP votes to slash funding for NASA Earth research; PLUS: Solar-powered plane embarks on its most dangerous journey yet ... All that and more in today's Green News Report!

IN 'GREEN NEWS EXTRA' (see links below): Florida most vulnerable state to sea level rise, but has no statewide plan; Apple pledges to run its China facilities using mainly renewable energy; Track where oil train derailed was inspected day before accident; Proposed rule could mean free coal for mining companies on public lands; CA may add warnings for BPA ... PLUS: Fracking most likely cause of TX earthquakes, USGS says... and much, MUCH more! ...

Thanks for the courage and coverage of disturbing matters.

I am now certain that we will be governed by psychopaths until this is all over (Oil-Qaeda & MOMCOM Conspire To Commit Depraved-Heart Murder).