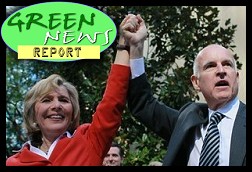 « PREVIOUS STORY "Why?"
» Go to The BRAD BLOG front page «
"Rotten to the 'Core': The Republican Run from Reality (and Their Own Policies) Continues" NEXT STORY »

"Yes, it's cold, and global warming is still real"

It's very simple. If a talking head doesn't know the difference between weather and climate, he's not qualified to talk about climate change. We need to call out these people before it's too late.


"green energy is a waste of time, so stick with fossil fuels"

California continues to lead! Hopefully the nation will follow.

You don't mind at all that your link shows you a graph of some global sea ice (Arctic and Antarctic) recovery, but then goes on to discuss only predictions of Arctic sea ice decrease (which have been completely correct)?

In other words, you don't mind being played for a fool by fossil fuel industry propaganda and passing the false information on as "good news"? Or you're just too duped to know any better?

It would be good news, Traducteur, if it were true. But unfortunately the scientists who do the actual hard work of gathering and analyzing the data (not the guys in non-scientist peanut gallery of non-scientists) say that's not the case, and this major planetary feature continues to decline.

Here's a visualization for you:

It's time to move on to talking about solutions.

« PREVIOUS STORY "Why?"
» Go to The BRAD BLOG front page «
"Rotten to the 'Core': The Republican Run from Reality (and Their Own Policies) Continues" NEXT STORY »
See MSVL and support BRAD BLOG! Click here for signed premium version!