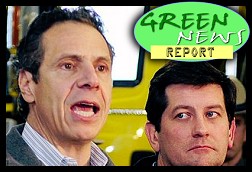 IN TODAY'S RADIO REPORT: NY Gov. Cuomo blames meteorologists for his failure to prep for deadly Buffalo snowstorm; Arrests in Canada protesting another tar sands pipeline; You'll never guess who is now the world leader in deforestation; PLUS: Those lefty treehugger hippies at the World Bank warn extreme weather will be the 'new normal' by 2050 ... All that and more in today's Green News Report!

Dredd --- I know! It was a real surprise to see someone - anyone - attempting to dramatize the info. No EPA official would talk that way in reality, but it was certainly an interesting approach.