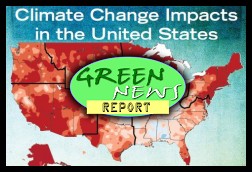 IN TODAY'S RADIO REPORT: Green News Report special coverage: Buckle up - landmark US report from 13 federal agencies warns climate change is here and now, and a clear and present danger... All that and more in today's Green News Report!

IN 'GREEN NEWS EXTRA' (see links below): Stanford Univ. to divest from coal; Fracking earthquakes not OK in OK; Drought-stricken town turns to toilets for water; WA: fierce local opposition to oil trains; Organic farmers fight over allowable synthetic substances; Indiana has the most toxic coal ash waste ponds in US... PLUS: Uh oh: East Antarctic ice sheet more vulnerable to collapse than previously thought ... and much, MUCH more! ...

We need to start attacking the climate change deniers for what they are. They are 19th century oligarchs/robber barons (or gullible followers of them) trying to hold onto their control of politics and the economy as it passing them by (if not already gone by) in the 21st century.
The robber barons of the 21st century are not conservatives in the sense that they are pro-business because more jobs and more economic development can occur with a green economy than with fossil fuels. It is only conservative in the "selfish, keep things the way they are because it is profitable for me" mindset.
Being green is not anti-business, it is anti-pollution. Fossil fuels cause more problems/costs for the future than it profits now.
The fossil fuel companies used to be able to make profits at the end of the 20th century with environmental regulations, but are now finding it harder to maintain their grip on the economy without gutting regulations. That is the sign of desperate and waning power. They have to destroy everything around them in order to keep the level of power they have now. If they want to destroy themselves that is their own problem but they can't destroy the planet (or at least human survivability) while they are trying to cling to their power.