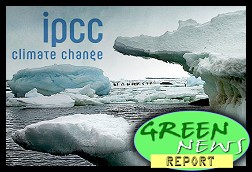 IN TODAY'S RADIO REPORT: Green News Report Special Coverage: The UN Intergovernmental Panel on Climate Change (IPCC) Report on Mitigation: the costs, the risks, and the opportunities. Is it too late avoid climate catastrophe?... All that and more in today's Green News Report!

IN 'GREEN NEWS EXTRA' (see links below): China's pollution may be causing America's extreme weather conditions; 900+ environmental activists killed around the world; March 2014 was 4th warmest on record; Kitimat, BC votes against tar sands pipeline; Solar-powered plane can 'fly forever'; OR: investigation finds aerial pesticides sprayed on residences; EPA underestimated fracking methane leaks ... PLUS: Innovation: Scientists discover how to generate solar power in the dark ... and much, MUCH more! ...