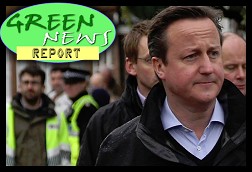 IN 'GREEN NEWS EXTRA' (see links below): Heads up, Atlanta: new winter storm on the way; Too much winter, not enough propane in US; Oil industry double-dipping with government, insurance payments; Australia: weather service human-caused global warming responsible for record heat; WV chemical spill: 40% of homes still contaminated; BLM cheats taxpayers with giveaways to coal industry; Scientists criticize US decision to de-list wolves ... PLUS: Smear campaign: after scientist said weed-killer chemical was harmful, its maker pursued him ... and much, MUCH more! ...

If the stock market had as many extreme events as our weather has had in the past decade or two, economists (and especially Republican ones)would be trumpeting the "Never go down" trend in our economy. But since this trend is happening to our climate conservatives will stick their heads in the sand and keep telling everyone that the globe is getting cooler, or there is no trend.

Economics is less understood than our weather and climate. We do not know all of the physics of meteorology and climatology yet but we are getting better at it every year. The stock market and the economy are highly unpredictable (as the 2008 market crash will attest). We are willing to bet our life savings on such a variable system as the stock market, but we can not trust the gradually improving science of weather and climate prediction because it is not correct every time. Why are we able to hedge our bets and bet on both sides of economic trends but are unwilling to hedge our bets or play it conservatively by trying to preserve the climate we grew up with?

That's the question of the ages, Alex. Climate science denial is simply illogical, but greed is a powerful motivator with the ability to rationalize even the most irrational acts.

Cognitive science research indicates that even established facts of physics are subject to being filtered first through what is best described as "tribalism" - identification with your preferred social group or political ideology. And if you're one of the lucky duckies who benefit the most from the status quo, you'll fight like hell to stay on top. Ironically, those who prioritize the mythical 'free market' above all else seem to be the most susceptible:

"[P]olitical ideology — and in particular conservative fiscal or free market thinking — is an overwhelming factor preventing acceptance of climate science."