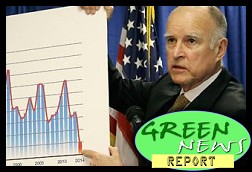 IN 'GREEN NEWS EXTRA' (see links below): Utilities Would "Strangle Solar" if They Could; Unchecked CO2 emissions will double extreme El Niño weather events; Climate scientist to US Senate: 'Climate change is a clear and present danger'; China pollution wafting across Pacific; Kenya to generate over half of its electricity through solar power by 2016 ... PLUS: Despite international outcry, dolphin slaughter at Japan's Taiji Cove ... and much, MUCH more! ...

« PREVIOUS STORY "In My Own Words, Part II: Black Republicans and 'Stockholm Syndrome'"
» Go to The BRAD BLOG front page «
"Are People FINALLY Catching on to the GOP Polling Place Photo ID Restriction Scam?" NEXT STORY »

Alex --- What you "think" you heard is not what was actually said: